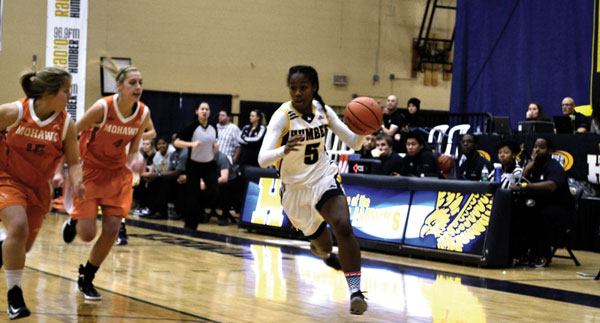 Aleena Domingo drives to the basket for a lay up against the Mohawk Mountaineers on Jan. 16.

Aleena Domingo may have been the OCAA Female Athlete of the Week, but the Mohawk Mountaineers did their best to shut her down on Jan. 16.

The Mountaineers applied unrelenting full court and half court pressure the entire game, as they crushed the Hawks women’s basketball team in a devastating 67-39 loss.

In the victory, the Mountaineers limited Domingo to 2-8 shooting, and the rest of the team to 25 per cent from the field and 15 per cent from long range.

“Aleena is super athletic in the post so we (tried to) keep a body on her at all times,” Mohawk’s head coach Kevin Duffy said after the game.

Duffy said Domingo is a persistent threat on the offensive glass and they tried to force her out to the perimeter to limit her production in the post.

“We didn’t handle their press very well and we lost confidence in other parts of our game,” he said.

The leading scorer for the Hawks was Natalie Hagopian with nine points and three rebounds.

Despite the loss, Sharma said Domingo winning the female athlete of the week is a positive for the team, adding the women are very supportive of each other.

“This is a season where we’ve had a lot of success because of our hard work and because of that someone was bound to get recognition,”  said Sharma.

Domingo said winning Athlete of the Week doesn’t feel like an individual award because the entire team made it possible.

“Our coach is obsessed with close outs, taking good shots, getting back on defense and sharing the ball,” said Domingo.

Despite the recent loss the Hawks are in good spirits and are confident they will get back on track.

They still sit atop the Western Division with a record of 10 wins and two losses as they head towards the playoffs.