The discipline of Scouts Canada was on full display as the procession of the 22 Division Toronto Police Service Rover crew marched into the gym at the Toronto Police College.

The annual Investitures ceremony for the 22 Division Toronto Police Rover Crew was held on April 7 in South Etobicoke.

Ward is the co-founder of the Rover Crew initiative, which he started with the help of fellow Advisor Const. Scott Walker nearly 11 years ago while the two were still students in Humber’s Police Foundations Program.

He said the initiative emphasizes service to the community, which is the model of the Rover section within Scouts Canada.

Led by Ward, the Rovers marched in sequence past special guests Chief Bill Blair, 22 Division Superintendent Frank Bergen, Police Foundations Program Coordinator Henri Berbue and Executive Chair Cameron O’Brien as an indication of their commitment to all the organizations.

“They have been confirmed as members of this program because they’ve shown that they’re dedicated and of good moral fibre, and we’re proud to call them members of the scouting movement,” said Ward.

He said the ceremony is the ultimate expression that they’ve met all the standards required of them to illustrate they will be a positive representation of the Scouts organization.

The ceremony included speeches from the guests who all commended and praised the Crew for their dedication to the constructive and positive cause.

“We accept any current or former Humber student who has an interest in policing, we don’t limit it to just Police Foundations,” said Cameron O’Brien, Executive Chair of the Rover Crew.

O’Brien, a second year Humber College Police Foundations student and Executive Chair of the Rover Crew, said as the head Rover he’s proud to represent such a dedicated group of individuals.

“Being the chair and seeing the hard work that they’ve put in and feeling like I had something to do with the dedication and commitment that they’ve shown is really an unparalleled feeling,” he said, adding the opportunity to deliver a speech in a public forum that expressed these sentiments was fantastic.

O’Brien said he joined because he was looking be a part of an organization that could facilitate opportunities that have meaningful involvement with the both his local and school communities.

“I wanted to be a part of an organization that would give me purpose,” he said.

“Being able to come together with like-minded individuals and have a common goal to work towards is really fulfilling,” said O’Brien.

Ward and Walker said with their years of experience in Scouts Canada organizing the Rover Crew was very important to them.

“When you look at the mission of scouting, which is to help develop young people into role models and great members of society, the idea here is to provide them with life experience that will help develop them into better individuals,” he said.

With 22 years going through the various scouting ranks in addition to time with the Rover crew Ward said he feels honored to be group commissioner of the crew representing Scouts Canada. Walker said he’s been with the organization for nearly 16 years. 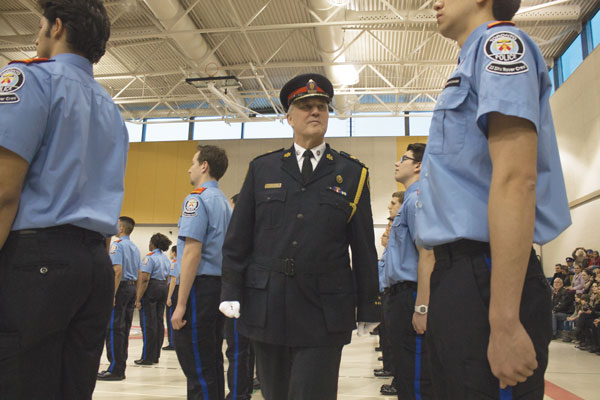 Toronto Police Chief Bill Blair greeting the members about to be officially invested into the 22 Division Toronto Police Service (Humber) Rover Crew at the annual Investitures ceremony on April 7, at the Toronto Police College. | Travis Pereira

As Humber alumni Ward and Walker said they view their integral role as advisors for the Crew as bestowing the same guidance and wisdom they were fortunate to receive, on the fleet of Humber students coming up after him.

“Every once in a while we get phone calls from people who have graduated the program updating us on what they’re doing and simply thanking us for the program we’ve put forth,” Walker said.

Ward said his continued involvement allows him pay it forward even though he didn’t expect the program to be such a success.

“I would be lying if I said we didn’t benefit from this program as well, however that wasn’t the motivation behind it,” he said. “We’re here to see these guys succeed, ultimately, that’s what’s keep us around.”

Ward said even if members of the crew don’t become officers in the future he views the program as a success because it helps groom quality individuals to make positive contributions to society.

During his speech Chief Blair said the eclectic mix of Rovers is a great representation of society at large.

Blair said the Rover Crew shows there’s been a necessary shift in the understanding of what the average law enforcement officer should be.

Ward said being a Scouts Canada program that’s sponsored by the Toronto Police the Rover Crew is a great representation of the service’s commitment to transformative community engagement.

“Proactive programs of this nature are basically another avenue for the police department to get out there an engage with people in the community and work on these positive things,” he said.
He said Toronto Police is committed to helping communities become safe and productive places to live.

After reciting the Scouts Promise, the newly invested members were each personally congratulated by Chief Blair as he placed the scarf, known as a Necker, on all of them.

“When the Chief came around and handed us our Neckers it was really awesome, I loved that part,” said Oula Al Hissnawe, first year Police Foundation student and newly invested member.

Getting in this uniform is really cool because even though we’re civilians we can get into a lot of events and work with police and that’s really rare.
Al Hissnawe

Al Hissnawe said she joined the crew because it’s a great opportunity to make use of her love for volunteering.

“I volunteer a lot with Humber College,” she said. “I started doing a lot of work in my first semester with Henri Berube and I realized I enjoy volunteering more than doing paid work.”

O’Brien said in terms of volunteering members are expected to perform 80 hours of service in their first year. He said going to various events makes it easy to quickly accumulate the hours.

He said the Rover Crew has participated in 34 community events this year which translated into more than 1,700 volunteer hours.

Al Hissnawe said wearing the Rover crew uniform comes with just as much responsibility as it does privilege.

“Getting in this uniform is really cool because even though we’re civilians we can get into a lot of events and work with police and that’s really rare,” she said.

O’Brien said the fact that the 22 Division Rover Crew uniform has the Toronto Police patch is unique and a huge honour that’s highly valued.

“It’s very rare for other organizations to be able to wear that patch, and that speaks a lot to this partnership and the reputation of Scouts,” said Ward.

Ward said he had an enriching experience as a Humber student and it makes him proud to see the continuation of the tradition with Humber students.

“I can see every year the quality of the students who come out to this program. It’s a direct correlation to that quality staff,” he said.

Walker said on several occasions he has been impressed with students who have told him they decided come to Humber for the sole purpose of joining the Police Foundations program as well as taking part in the Rover Crew.

“That’s a really proud moment for us because that speaks a lot about the reputation of this program, as one of the reasons why people are choosing to come to Humber,” said Ward.

O’Brien said for those students looking for direct exposure into some of the rudimentary practices of policing along with the opportunity to make connections and network the Rover Crew provides the best platform imaginable.

The ceremony ended as it began with the Rover Crew marching in procession exiting the gym while being led by Ward.

As soon as they broke the threshold of the door most members rushed back in to take photos with Chief Blair and the other guests.