Galanin’s piece is an iconoclastic photo of Star Wars character Princess Leia spliced next to a Hopi/Tewa native woman from southern Arizona.

“After contemplating the piece I decided to move forward with a theme that has roots in Afrofuturism,” Yusuf said. 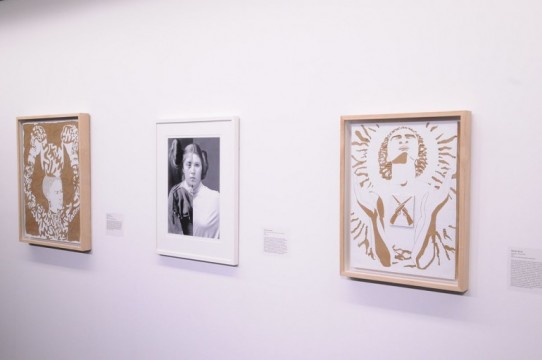 Afrofuturism began as a theme in culture in the late 1960s with the use of a sci-fi aesthetic in music and literature depicting predominantly African-American people exploring the stars.

“For the first time in history black youth were being engaged on the topic of the future of their culture while also exploring the past of their ancestors being displaced from home through allegory,” Yusuf said.

For artist Natalie Wood, who has three pieces on display in Occupy Space, connections to Afrofuturism have been a part of her entire life.

Growing up, Wood read the works the iconic Octavia Butler, the author of several science fiction novels, and listened to musician Sun Ra, often speaking with her grandfather who believed in what she described as “higher science” and forms of mysticism.

“Afrofuturism allows me to explain and understand my experience as black and queer in a manner that is empowering, healing and creative,” Wood said.

The ranges of voices found on Humber campuses extend beyond the black community and Occupy Space reflects that by hosting the work from a broad spectrum of artists including Jacqueline Hoang Nguyen and Rajni Perera with Richard Thomas.

Yusuf led a discussion on Occupy Space as a part of Humber Galleries’ Mini-Talk Monday series, which are held at North and Lakeshore campuses on alternating Mondays.

Although the Mini-Talk opened to a mini-crowd at Lakeshore campus this week, the content was engaging, intimate and allowed insight into a relevant form of Canadian and American art.

“The goal is to be an informal way for anyone on campus to learn more about the art on campus,” Ashley Watson, head curator at Humber Galleries, said.

Occupy Space runs until Oct. 1, when a closing reception will be held.