Purina PawsWay, located on the Toronto Harbourfront, held their second annual Strut with your Mutt event in collaboration with the Humber program. This is the first year the college was presented with this opportunity as last year’s event was produced by fashion students at Ryerson.

Senior account coordinator of Free for All Marketing Devon Crofts worked closely with Purina for this event. He says the Strut with Your Mutt is an opportunity for students to gain some real life experience.

“Purina PawsWay just wants to celebrate the relationship between people and their pets, that’s what this place is all about,” Crofts says, which supports this year’s overall theme that ‘pets and people are better together.’ “As for this event, it’s not so much about the fashion, its’ more about just having a bit of fun.”

The evening was animated by Blake Carter, host of 93.5 The Move’s morning show and Fashion Arts and Business program representative Evan Green. Dogs of all sizes, accompanied by their owners, took to the ‘dogwalk’ in some stylish threads from Sears and Hotel Doggy, a local dog fashion brand.

A few celebrities were also present―dog celebrities, that is. Five Toronto-based Instagram famous pooches came out to play. One of which was half Pomeranian, half fox, or “Foxeranian”, Pom Pom Chewy. Chewy has over 50 thousand followers on Instagram. A meet-and-greet session was held after the show where attendees had the opportunity to snap a photo with the celebrity canines.

Humber students had been working together to organize the event since September as part of the program’s event planning and budgeting class. 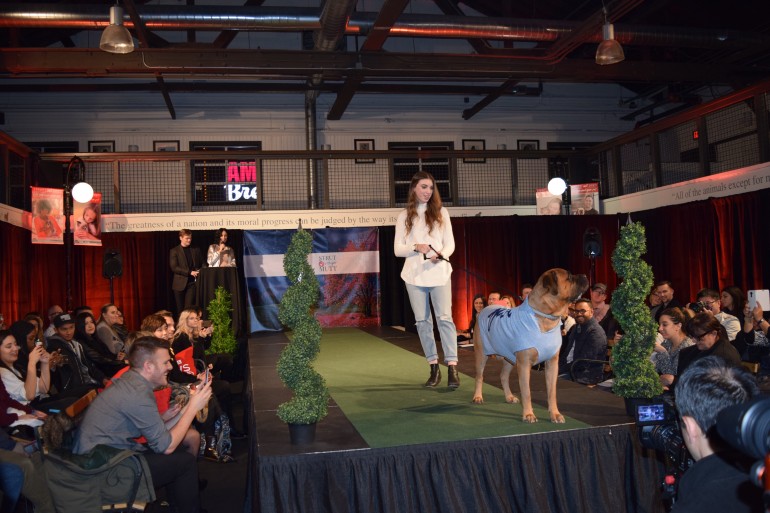 “We had five committees, a budget team, a communications team, a technical production team, a production team and a staffing team. The students were divided into their committees and worked very closely within their committees to make sure that the event is executed in a professional way,” says Fashion Arts and Business coordinator and events planning and budgeting professor Jennifer Dawson.

The idea behind the project was to give students a real hands-on experience of what planning an event is actually like. It also offered them the chance to see just how much work goes into putting together an event like this beforehand.

Second year fashion arts student Amanda Seto, who was part of the communications team, says she really enjoyed the experience. “It was fun working with actual companies, people who are from outside Humber. It made it feel more real,” Seto said.

Shannon Sasso, who was also in charge of communications, said the students had responsibilities such as advertising the event around the school as well as working on the script for the masters of ceremonies which included information on the dogs and their owners.

Students from each team had specific duties they were required to work together on achieving. The production team, for example, was in charge of putting together the set whereas staffing was in charge of finding volunteers for the evening.

Guests were encouraged to post about the event on social media using the event’s official hashtag, #SWYM2016. For every post using the hashtag, Purina promised to donate $1 to Save Our Scruff, a local dog rescue.