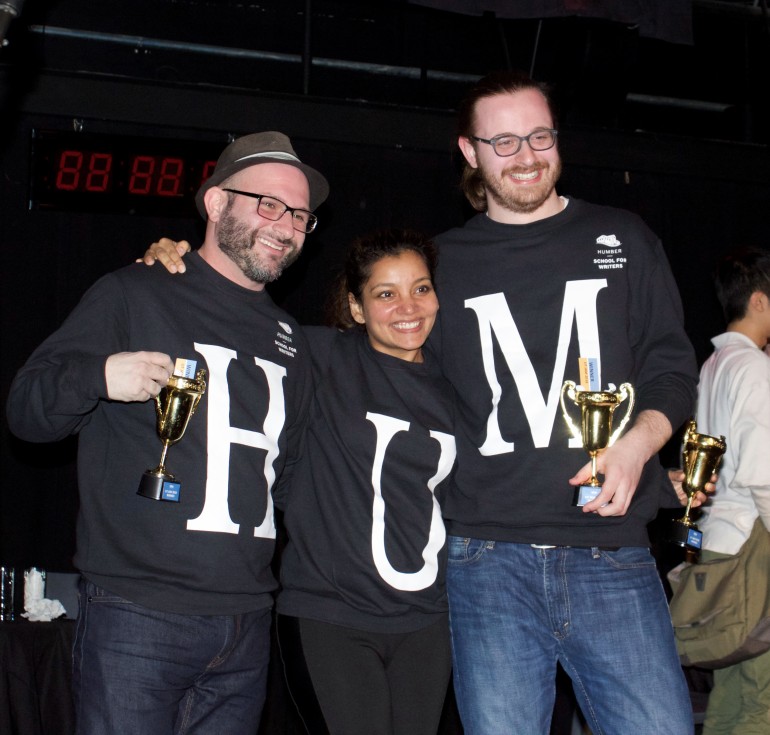 It was a day to remember…

It was the line given by a Toronto Harbourfront Centre audience to the Humber team as their first prompt to begin their improv short story at the International Festival of Authors’ Lit Jam on Wednesday night.

With only three short minutes on the clock, creative writing students Selma Hussain, Adam Seegal and Daniel Goldsmith huddled together to bounce off ideas and get ready to perform for the judges and audience eagerly awaiting the creative storytelling that was to come.

The contestants had to craft an improvised short story that had compelling characters, an engaging plot, with a clear beginning, middle and end in just five minutes. Prompts could only come from each other.The pressure was intense but the team managed to pull it off seamlessly.

The judges, comprised of critically acclaimed authors Karen Connolly, Joseph Kertes, and Nico Ricci, jokingly accused the group of having fully rehearsed before the performance.

The Humber storytellers faced off against creative writing program teams from York University, Ryerson University and the University of Guelph. They were all vying for $1,500 in prize money and the chance to have their story published online in NOW Toronto.

Humber took home first place, although all the teams put together interesting, imaginative and comedic stories on the spot. The judges agreed the Humber team excelled in both performance, story structure, flow and characterization.

The Humber team was selected by their teachers and program director David Bezmozgis. together.

There was very little preparation before the night of the show that went into the performances.

“We only met twice, first was with (Bezmozgis) when we kind of brainstormed and then the second meeting we did a few dry runs with a few random prompts we came up with,” Hussain said. “We only did it for, like an hour and a half, and each time we did it, it was different.”

She said the team wanted to keep its creativity fluid “so we weren’t sure what was going to happen in the end and it ended somewhere that I was not expecting tonight either.”

During their brainstorming sessions, the team had some time to figure out the type of story they wanted to tell and review a few variables before putting together their winning story.

“We had the idea that we wanted it to be some sort of genre piece be it a murder mystery or a romantic drama like we ended up choosing,” Goldsmith said. “We had a few different directions we could take things on stage and, yeah, it all worked out in the end.”

The concept for Lit Jam was created by Kertes, an award-winning author and the founder of Humber College’s creative writing and comedy programs.

It started in 2017 as a new way to spotlight emerging talent and a chance to explore a different way of storytelling.

The event gives students from different schools the opportunity to motivate each other and to receive valuable feedback from authors who are judges, said festival’s head of marketing Amy Dennis.

“The whole idea of IFOA and Humber School for Writers and the workshops is you put together disparate communities, and they all coexist and they have an opportunity to realize that writing can be a career and writing is a lifestyle,” Seegal said.

“Writing is not just a person in a room alone, so there’s a lot of benefits to an event like this,” he said.