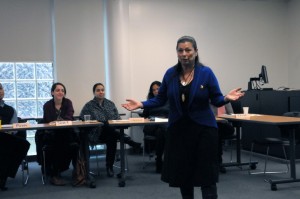 An increase in reports of discrimination at Humber College led to Aboriginal awareness workshops.

“We are trying to limit paper work,” said Charles, who consults the college on Aboriginal issues. “Instead of constantly filing complaints to Human Resource, we decided to educate faculty members.”

She said the sensitization workshops focused on some of the central beliefs of the indigenous peoples and were meant to help staff develop a better understanding of the current culture and the history.

Charles said this was the first of what will become mandatory awareness training for new staff at Humber.

“We are doing this to demystify some of the beliefs people hold about Aboriginals,” said Charles. “We shouldn’t have called it awareness, Aboriginals have always been here, people just need to be sensitized.”

Banakonda Bell, a professor at Ryerson University and an Aboriginal traditional teacher and healer, led the Nov. 29 workshops that took place at the North campus. Faculty from North and Lakeshore campuses were in attendance.

Bell said she has lead similar workshops in South Africa, Ecuador, United States and all the provinces of Canada for more than 15 years.

She said she is pleased with this initiative by Humber College to sensitize staff on indigenous peoples’ history, beliefs and customs.

“Humber seems to be keen on diversity,” Bell said. “Diversity is essential for life, just how the creator made it and communities should embrace it.”

Debbie Van Mierlo, an enrolment advisor in the Office of the Registrar, said she works with Aboriginal students and workshops like these help to make her job easier.

“Aboriginal students come to me for guidance when selecting a program,” Van Mierlo said. “This session will help me to know how to guide them more effectively.”

Van Mierlo said she was also familiar with Bell’s work before attending and wanted to be present to listen to her again.

“Banakonda is fabulous,” said Van Mierlo. “She walked us through her presentation effortlessly, allowing us to learn so much about the world and ourselves through her culture.”

Amrita Tiwari, a Humber enrollment officer, said her expectations of the workshops were surpassed.

“Her presentation forced me to think,” Tiwari said. “I have been challenged to be mindful of things I say to Aboriginal students.”

Tiwari said the workshop was “important without a doubt” and should be mandatory for the student population.

Charles said there is a proposal to extend the workshop to the students, but right now the focus is on faculty members.

“We have to do it in stages,” said Charles. “To ensure it is effective and does not get derailed shortly after being launched.”