It was the third time in as many years the firm has come to scout grads.

“The students learn all necessary skills required to make an immediate impact in the world of automation,” Gaines said, whose company presented to students the types of opportunities their business can offer.

Next term, they will collect resumes. 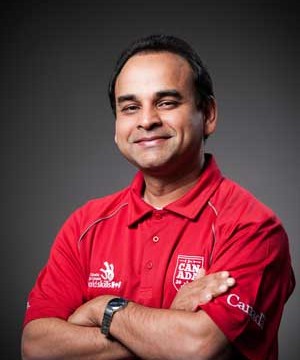 “I’ve been working on creating industry partnerships for the past 10 years,” program coordinator Neal Mohammed said. “For the past six years, about 90 per cent of the students find jobs before their last day of school in this program.”

Esys is among several companies that address Mohammed’s students on a regular basis. They present to the class in the fall term and hire students in the winter.

“Just to have a U.S. company coming over to Canada is amazing,” Mohammed said. “I’ve worked on industry partnerships for many years. And for last six years we are collecting the benefits… Even through the (2008 recession) we didn’t have any problem placing the students from this class.”

In the third year of the course, Mohammed forms teams for selected automation projects. The teams are required to completely design, assemble and integrate an automated system from start to finish.

“The company recruits from many colleges and universities in the U.S. as well. But none of them directly correlates with (our) business like Humber,” Gaines said.

Headquartered outside Minneapolis, Esys developed a manual, Transition from Humber Graduate to Esys Employee, a Google document created based on the experiences of Humber graduates employed by the company. These people are asked to modify the document as they think of items that can be helpful to future graduates making the move south of border.

Esys works with each Humber hire to get them ready for the transition. It provides them with necessary paperwork to work in the United States, housing options and tours of the area.

“Beginning this year we are proud to announce that Esys Automation and Humber College have established a Strategic Alliance Agreement,” WHAT IS THIS? Gaines said.

He is a part of a team developing a machine he proposed for a project that sorts ore samples.

From technical point of view, Van Weert’s team designs the machine from scratch, while most of the other projects are about getting various parts and piecing them together with specifications.

“Ours is a little bit different. It requires more commitment,” Van Weert said.

He already has an offer of employment from Siemens and said he thinks he has prospects with Esys and other firms as well.