Anti-Islamophobia event an eye-opener for students 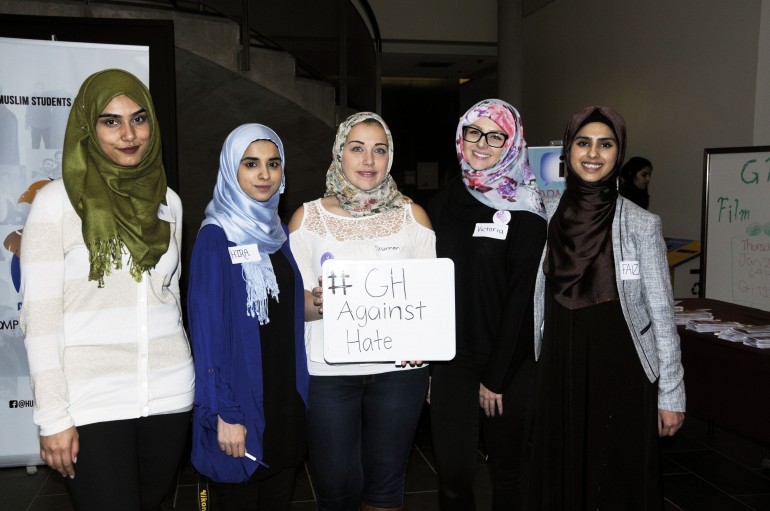 A slew of verbal and physical attacks on Muslim women walking the streets of Toronto last November has fueled University of Guelph-Humber students in combatting Islamophobia.

Ron Stansfield, professor in the Justice Studies program at Guelph-Humber was particularly struck by the intolerance demonstrated by Torontonians in the wake of the Paris attacks.

Stanfield asked his students if they would be comfortable if he wore a hijab as a show of solidarity.

Faiza Zulfiqar, a fourth-year Justice Studies student suggested offering students an opportunity to wear a hijab and talk about the experience in the GH Atrium yesterday.

It was then that the Guelph-Humber Against Hate event came into being.

“I was very upset to hear about those events,” said Stansfield, “It led to a discussion in class on how this is a human right that is being trampled on and we need to do something about it.”

Thursday’s event was the second of its kind at Guelph-Humber and the group is hopeful to have many more in the future, said Stansfield.

Zulfiqar took on the role of lead organizer of the Guelph-Humber Against Hate event with the hope that it would help dispel feelings of prejudice towards Muslim women on campus.

The event featured a board covered in students’ hand-written personal experiences of Islamophobia to show that discrimination and intolerance are issues affecting students routinely.

“Women in this school have been assaulted physically and verbally,” said Zulfiqar. “Students here need to realize that and support these women around campus and anywhere outside of it.”

“The key point here is that prejudice is about ignorance. Prejudice towards women who wear the hijab is ignorant,” said Stansfield.

Hira Zulfiqar, Faiza’s younger sister, is also a Justice Studies student in her second year. She became involved with the event after reflecting on her personal encounters with Islamophobia.

“I’ve had some really bad experiences by wearing the hijab, myself, and being a Muslim woman,” she said.

Stansfield was happy to see the perspectives of students beginning to expand as non-Muslim students tried on the hijab.

Wearing the hijab, some students felt passersby were staring, while others said, “‘covering my hair really made a difference,’” said Stansfield. “The more informed people are, the less likely they are to be prejudiced,” he said.