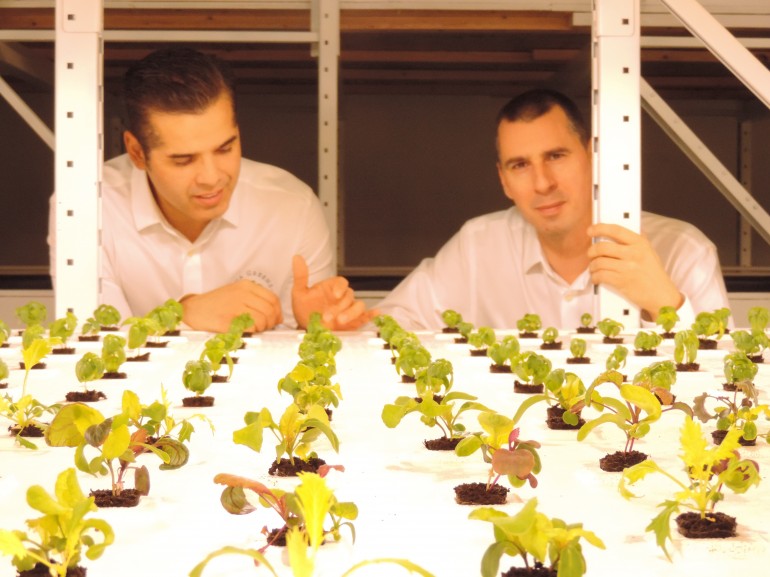 It’s -20 C outside. Snow swirls on howling winds. There’s not a living soul or thing to be seen outside. But inside a commercial complex on Thamesgate Drive in Mississauga, fresh herbs like basil, parsley and cilantro are sprouting.

“It’s a closed loop eco-system. We have fish that fertilize plants, while the plants filter the water that the fish swim in,” said Alvarez.

This way, Alvarez’ and Petten’s aquaponics company, Aqua Greens, is able to produce organic greens in-doors without the use of a greenhouse structure. They also have the added bonus of farming fish.

Alvarez and Petten have set up shop in an empty commercial space in Mississauga, where they’re currently growing thousands of plants that they will eventually distribute in Toronto. It’s also home to over 800 tilapia fish.

The duo got their start in the hospitality industry, and combined have over 20 years of experience.

“We were working as servers, when we decided we wanted to do more,” said Petten.

They both pursued the Sustainable Energy and Building Technology program and would eventually do their final project on aquaponics.

“We realized that in pursuing aquaponics, we would have the ability to combine our passion for sustainability and passion for food,” said Alvarez.

It is perfect for urban settings, he said, where there is no available farmland, and the growing season ends in October, not beginning again until May.

Patten said instead of shipping produce in to the city during this time, Toronto will have access to hyper-local, completely organic and healthy food.

Though this sounds like a win-win situation, Alvarez and Petten have had difficulty with Toronto City Council.

“Because it’s a method that no one has really heard about for a very long time, the city needs to see proof-of-concept before we’re allowed to establish ourselves within city limits,” says Alvarez.

Petten said that it is frustrating because they have the ability to feed people but have to wait for approval.

Aqua Greens may still have something to prove to the city of Toronto, who would not give them a permit to begin growing somewhere within city limits, but they’ve already proven to be very popular.

“Both Sobey’s and Wychwood Barns Farmer’s Market have approached us, so the interest is there,” said Alvarez.

Aqua Greens has been getting lots of exposure, partly due to Humber College.

“We were the recipients of both the Humber New Ventures Seed Fund and the Humber Launch Pad competition, where we’ve accumulated over $30,000 in funding for Aqua Greens,” said Petten.

Humber Launch Pad is a Dragon’s Den-style competition, where entrepreneurs from the school and surrounding community pitch their business ideas in front of a panel of judges.

Aqua Greens was selected as one of the winners to receive funding for their idea.

“Through Humber Launch, we had access to mentors, business plans, business coaches, and we were able to figure out what our options looked like going forward with this business,” said Petten.

“We’re just so proud of them,” said Mitchell, “They’re dedicated and hard working. We definitely plan to stay in touch.”

However, even more than dedication and hard work at Humber Launch, innovation is still key, said Mitchell.

“We look for ideas that are outside of the box, or with no box at all,” she said. “All ideas are good, but what we do is see how we can use that idea to make a business.”

Petten said that Humber has been good to him.

When the business is fully operational, in another four to six months, Alvarez and Petten plan to have Humber co-op students come and do their placement at Aqua Greens.

The Humber Launch team can also expect a bundle of fresh-produce coming their way.