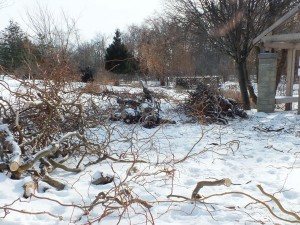 Enchanting to look at, the frozen branches of trees after this month’s ice storm sparkle like crystal in the sun.

But Toronto’s major ice storm of last month was not just a pretty winter wonderland – it was also a destructive force, including at the Humber North campus Arboretum.

“As far as trees that have broken limbs or are broken completely, you’re looking at over a hundred for sure,” said Jimmy Vincent, coordinator at The Centre for Urban Ecology at the Arboretum.

The Arboretum’s lone mature butternut tree, which belongs to an endangered species, appears to have come through the storm unscathed, said Vincent, along with six butternut saplings grafted onto a black walnut tree. Surveying of the damage is underway, he said.

“For just the Arboretum, it’s really hard to say the estimated costs, because we have a lot of different natural areas. Those are areas that we will just leave down. We don’t need to clear trees from them.”

Vincent said the flipside to this destruction is fallen and damaged trees will actually form new habitats for the Arboretum’s wildlife. Owls specifically are known to roost in tree hollows.

Among the Arboretum’s owl species, Vincent says the northern saw-whet, long-eared, and screech owls will make use of the damaged trees.

Shannon Ho, business assistant at the centre, said with a storm this severe, there is always a chance that the urban ecology facility will lose money due to possible cancellations of booked school groups for safety reasons.

“Some of the areas that we like to use are either closed or not safe as of right now due to broken tree limbs, or dangling tree limbs, or even because of the ice,” said Ho.

The centre kept all current bookings by changing tour itineraries, said Ho, adding safety is always the main concern. Since many trails are closed due to storm damage, she advised hikers to stop by the centre first to find out which trails are closed.

Vincent emphasised that most trees can survive the damage inflicted by a storm. But if an arbourist doesn’t properly dress the wounds left behind from broken limbs, a tree is likely to die.

Tasnim Chowdhury, 22, a third-year business student at Guelph-Humber, started coming to the centre as part of her after-school program while still a high school student and secured a job there as part of Humber’s Work-Study Program.

Chowdhury, who answers many of the incoming calls there, said so far there have been none in regards to storm damage to the Arboretum’s canopy or out of concern for wildlife.