Instead of students leaving Humber with only homework weighing down their backs, many left with figurines, comics, hand-drawn super-heroesas IGNITE Student Life hosted what it called their biggest Comic Expo yet.

Students visiting the North campus Student Centre on Monday were greeted by familiar superheroes figures propped beside a large archway that was intricately made from balloons, marking the entrance of the Expo.

The event began with a costume contest where cosplayers had a few minutes to strut their stuff for the crowd. 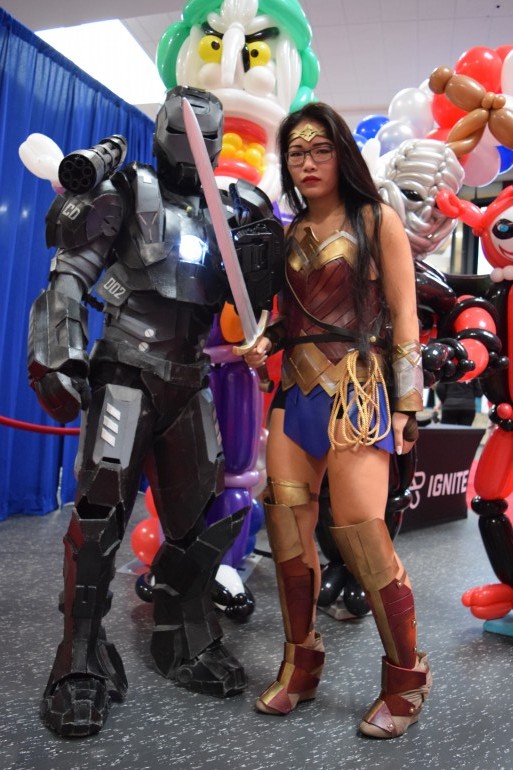 “It was really fun up there, (and) I saluted everyone then did a dab, which got the crowd going,” Festejo said.

The highlight for the gathering, however, was the arrival of Agents of S.H.I.E.L.D. actor Brett Dalton who was greeted by a line-up of students waiting to meet the man behind the evil character.

With a smile, he shook hands and signed autographs for students and even brought some to tears.

A narrow red carpet led the way through the labyrinth of booths accompanied by illustrators, writers, and vendors advertising their merchandise.

IGNITE partnered with Stadium Comics, a Brampton shop that sells comics from popular publishers such as Marvel, D.C, and otherss. Their booth was stocked with categorized boxes selling a variety of comics and graphic novels ranging from the Hulk to Canada’s own, Captain Canuck.

An  interactive vendor was Eweb360 showcasing virtual reality equipment. Students ventured into the digital world using the VR 3D painting feature where users were able to paint pictures with a handheld device that displayed their work on a T.V. set.

Eweb’s Nick Colaizzi said their products are perfect for gaming and entertainment as well as educational purposes.

What was initially Humber North’s  game room transformed into a tournament for the card game Magic: The Gathering, where students got together and put their decks to the test.

This event was used to publicize  the campus’ Magic: The Gathering club, where they meet once a week to play or teach those curious to give this complex card game a try.

Toronto comic artists such as Christopher Yao and Paris Alleyne grabbed everyone’s attention as they drew detailed images while sitting at their booths. Attendees got the opportunity to witness the time-consuming effort illustrators put into their work.

“Its crazy watching how these comics are drawn and made, I didn’t realize how cool and difficult it really is,” creative photography student Chris Fitzsimmons said.

“Our best advice is to attend Ty Templeton’s Comic Book Bootcamp, which is actually where we met,” Noir said. “The man’s a genius and it’s a great way to meet other writers and illustrators.”

Canadian comic artist Templeton, who attended the comic show last year, set up his boot camp, which is really a comic artist school, on Spadina Avenue near College Street.

As the 3 p.m. end of the event neared, vendors packed up their booths and Dalton gave out his last hugs for the day.