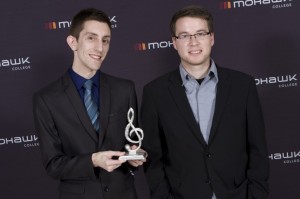 Humber art programs won big in Hamilton this past month.

Alumni from Humber’s film and music programs received prestigious awards at the Hamilton Film Festival and the Hamilton Music Awards for their final year projects at Humber.

Humber film and television production grad Greg Breen’s film Steven Myerschmidt Bites the Big One won the Best Student Film award on the evening of Nov. 10 at the festival.

“It was a really great thing to have a film recognized. It’s a great award, great festival, great place to have your film be seen,” Breen said about winning the award.

Steven Myerschmidt Bites the Big One is a “short satirical comedy about a solar panel manufacturing plant that goes on strike after reading Animal Farm.” Breen said the film was his final year project at Humber. He and his crews started shooting last September for five days, and they spent their very last semester editing and producing.

Breen said it was a long process but rewarding one, and he got fantastic support from Humber. The professors were really helpful with the movie, as well as the production.

“Everything that I know about making film, I learned it at Humber,” Breen said.

“There are many movies that have good quality of pictures, but not the sound. Steven Myerschmidt Bites the Big One has a good quality in both,” Fleet said. “People are still talking about it after the screening.”

A week later, Humber grad Brad Cheeseman won the Instrumental Recording of the Year award with his group the Brad Cheeseman Group for their debut EP Mixed Messages at the Hamilton Music Awards.

Bassist and composer Cheeseman said he was a little surprised when the group’s name was announced.

“I thought the last performer at the awards, who’s also nominated, will win the award?” Cheeseman said. “I was like ‘oh, really? Sweet!’”

Cheeseman said Mixed Messages was a combination of a fourth-year project and recital at Humber for his Bachelor of Music. He said he wants to play and develop a sound, keep performing and improve his song-writing skills in order to build an audience.

“I’m more concerned about telling a story in each song, rather than telling the style,” Cheeseman said about his music. “It’s all about the message.”

Brown’s thoughts of Cheeseman changed when listening to the group’s EP. He said Cheeseman turned out to be not just an R&B kind of guy, but also has jazz going in him.

“The jazz world is very competitive and there are many amazing, talented musicians out there,” Brown says, but added Cheeseman could nonetheless do well. “His writing and music make great connection with the listeners.”