Bluesfest blues: Music fests need honesty on what they are 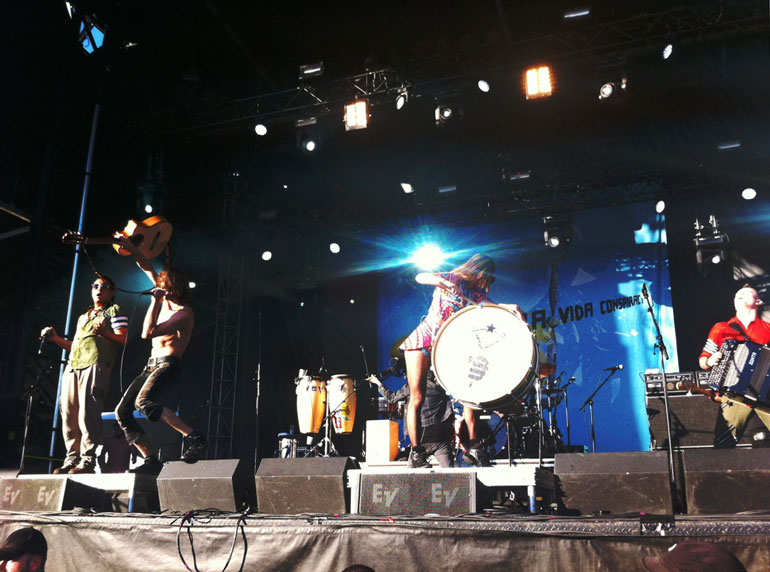 (Photo by Lucy Sky) Gogol Bordello putting on a “stellar performance” for a crowd full of sweaty fans at the 2014 Ottawa Bluesfest.

Music festivals should be expected to stay true to their roots, just as much as bands are expected to stick to their originality and sound over what their label wants them to do.

Live shows are what is keeping the music business alive and festivals have been an enormous part of that for decades. But they don’t always “stay true” to their roots, as many of us expect they should.

The RBC Ottawa Bluesfest, for example, has changed a lot since its debut back in 1994 – moving through three different locations in its 21 successful years. Moreover, coming into its 22nd year, its variety of music has changed about as vastly as the size of the festival grounds.

It began as the Ottawa-Hull Bluesfest, at a small park in downtown Ottawa, with a three day line-up featuring blues headliners like Clarence Clemons and the Tony D Band. The festival evolved rapidly in many ways and has grown exponentially.

Ottawa is my home town and I’ve been going to Bluesfest for as long as it’s been around. Today, it’s absolutely nothing like what it was when it started. The music is different, the atmosphere is different and the crowd is completely different.

With more sponsors to satisfy and bigger grounds to fill came a need for bigger budgets. That meant bringing in different genres. 2001 was the year the event became the Cisco Systems Ottawa Bluesfest, as well as the year they began featuring new music, like the rock and roll group George Thorogood and the Destroyers (which was a terrific show) and the rap artist MC Hammer.

In the 15 years since, it has grown into one of the top 10 ranked music festivals in Canada, hosting massive headliners from many different genres. That includes rock and roll groups like KISS and Rush, rap artists like Snoop Dogg and Wu-Tang Clan, pop sensations like Fergie and Lady Gaga, electronic artists like Skrillex, Adventure Club and Diplo and even sub genre bands like the gypsy punk group Gogol Bordello, who always put on a stellar performance.

While this is all in the nature of the industry and it can be difficult to avoid when the festival wants to please as many fans as possible, there is no room for “blues” in the festival’s name anymore.

You just can’t have your cake and eat it, too. When you play little to no blues music, it’s just a little odd to call it Bluesfest. Not to mention insulting to true blues fans. This isn’t the only festival getting lost in pop culture. Rockfest in Montebello, Quebec has done the same thing. It began as a festival with only rock artists but then started bringing in ska acts, rap acts and heavy metal acts.

It’s much like when a band starts off as a punk group and progresses into a more pop sound, adhering to a larger fan base and expanding its popularity. Things like this really piss a lot of fans off, because people don’t like change and people don’t like to be misled. It was Bluesfest, not rap, rock, pop, electronica, metal, funk festival.

If you’re going to have a festival named after a specific genre, it should stick to that specific genre. Like the Ottawa Jazz Festival. It has been going strong for over 30 years, with a large and loyal fan base and has stuck to its roots, through and through.

The Jazz Festival is standing proof that you don’t need to sell out to your sponsors to bring in a large fan base. According to its website, the jazz event had a whopping 295,000 people in attendance in 2011, while the following year, Bluesfest is said to have brought in a very close 300,000.

The name Bluesfest is definitely misleading now, yet I’ve gone to see many of these acts and thoroughly enjoyed them. I’ve grown with this festival, I love and appreciate everything that it is, has been and hopefully what it will be in years to come. But the name needs to come to an end. We aren’t sitting on blankets in a field swaying to the smooth sounds of The Wailers anymore, it isn’t a blues festival anymore and the organizers need to get used to that as much as we do.