Calorie counting can cause dangerous results

Many students are suffering from eating disorders as a result of social anxiety, revealed a counsellor at Humber College’s North campus.

Speaking ahead of National Eating Disorder Awareness Week, Feb. 2 to 8, counsellor Andrew Tibbetts noted while the main purpose of eating is to fuel the body, we also eat to be social. Restaurants or cafes are common locations for hangouts, and often, friends share food with one another. Feelings of discomfort and insecurity amongst friends can be common contributions to a dangerous relationship with food.
“If the way you are eating does not seem healthy or is getting in the way of socializing, it could be a problem,” said Tibbetts.
People with eating disorders are preoccupied with food, obsessively count calories and may eat in secret, said Ali Henderson, a program manager for Sheena’s Place, a Toronto support centre for those affected by eating disorders.
She said eating disorders are often associated with shame and it may be hard to acknowledge there is a problem. The problem, however, could mean life or death. 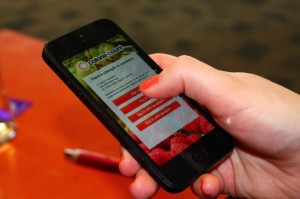 Calorie counting apps can be a danger to extreme dieters.

“Eating disorders have the highest mortality rate of all psychiatric illness,” Henderson revealed.
Tibbetts said the public’s obsession with celebrity culture is often a major influence behind eating disorders.
“You are supposed to look like these twiggy models that don’t even really look like that because they are Photoshopped,” he said.
Pressure from popular media affects males as well, said Jackie Grandy of the National Eating Disorder Information Centre (NEDIC).
“When you think of someone with an eating disorder, it is usually an adolescent woman. This perception is changing. Male models are impossible to live up to as well,” said Tibbetts. She added if anyone is concerned about what they’re thinking, feeling, or doing, they should visit the counseling centre on campus.
Counseling services are confidential, and free for students.
Humber counselling services encourages students to spread the word about National Eating Disorder Awareness Week. The National Eating Disorder Information Centre (NEDIC)  will host a spoken word event that week to raise awareness and highlight healthy body image.