Staff and students commuting to Humber North and Lakeshore campuses can soon reduce their ecological footprint, and the costs of driving alone, by sharing rides to campus.

Smart Commute, an association within Metrolinx, launches its Carpool Week campaign that runs from Feb. 3 to 7 at both campuses. The campaign promotes a website that matches riders up with drivers.

Lindsay Walker, manager of sustainability at Humber, said the college is collaborating with Smart Commute in response to transportation concerns of students and faculty, namely time and money.

“You can go online and register for free,” said Walker. “And you can tell it where you’re coming from, what campus you’re going to, what time of day and that kind of thing.” 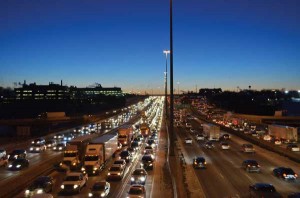 Looking for carpool partners can be difficult because students and even faculty and staff aren’t on campus the same hours every day, which makes scheduling difficult, Gumulka said.

Working with large institutions like Humber with a lot of daily traffic makes finding matches easier, he said.

“We try and have a lot of presence on campus and get as many people in the program as quickly as we can,” Gulmulka said. “Carpool Week is really good for that because there is an incentive, and so there is kind of a sense of urgency to create a carpool account, or profile in that five day period.”

The incentive this year is two Via Rail business class tickets to Quebec City from Toronto.

Trevor Allen, a sport management student, said carpooling is appealing if it shortens his hour and a half morning commute from Milton on public transit.

Lexus Gould, a student in the family and community social services program, drives to school three times a week. She said carpooling is a good idea because of environmental and financial benefits, but she would be hesitant to share a vehicle with a stranger.

“We encourage all of the participants in our program to sit down with the other people and talk about how it’s going to operate and some of the rules for the car pool,” Gumulka said.