A recent study published in a journal for science called PLOS ONE suggests there may be a link between cat bites and depression.

The study was conducted in the United States over a 10-year period and took into consideration the medical records of 1.3 million people, finding a correlation between those who reported cat bites and those who were depressed at some point in their life.

Depression was found in 41 per cent of patients with cat bites, David Hanauer, author of the study and professor at the University of Michigan, told Et Cetera. 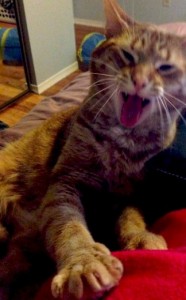 “Most likely, there is no direct connection between the bite itself and depression. It just happens to be the bite is what brings people to the hospital,” said Hanauer.

A Mayo Clinic study published on Feb. 5 covering three years of research revealed one in three patients with feline bites have to be hospitalized because of severity.

“Our study could help lead to the detection of depression in some patients and ultimately treatment. There definitely seems to be a connection, but we don’t know what the connection is. The bite itself is like a proxy for cat ownership,” said Hanauer.

People who suffer from depression often feel lonely and helpless. Perhaps they are looking for companionship – a pet will offer that comfort and satisfaction, said Alexis.

“It is possible those with depression who happen to have a cat act differently around their animal. Cats may detect their abnormal social interactions and bite for some reason,” said Hanauer.

He said women are three times more likely to report a cat bite and of those who do seek medical attention, 50 per cent chance have a chance of being diagnosed with depression.

Alexis said she does not see very many people for this sort of thing at the health clinic on campus, but depression is often under-reported.

“Students can walk in anytime to speak with a nurse if they are concerned but need to make an appointment if they wish to see a doctor,” she said.