Humber College student Bella Simonova gets on the train alone. A man follows her and sits beside her.

He tries to get her to agree to go on a date with him. She tells him she isn’t interested, but she knows that her response won’t necessarily stop him.

Simonova recalls the incident as a time where she felt that she was losing control over a situation because a man wouldn’t take no for an answer.

Early Childhood Education student Rosamaria Storino remembers a time when she had to get the police involved because two men would not leave her alone while she was walking home.

“They were basically stalking me,” she said.

When the police got to the Mac’s convenience store where Storino had stopped, the two men took off in a black car.

Storino’s mother arrived to take her home. On the way, they saw the same two men driving back to the location in a grey car.

Humber Counsellor of Student Success and Engagement Liz Sokol said part of the problem with sexual harassment is that our society still doesn’t support women having the same amount of authoritative power as men. 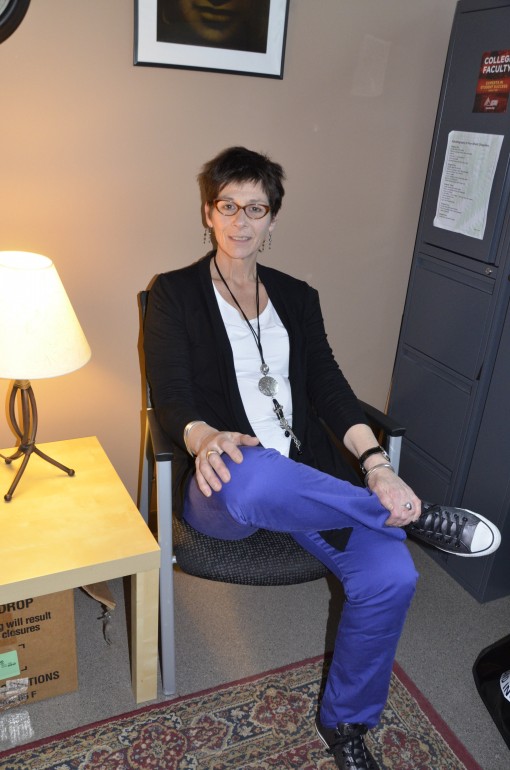 Humber College Counsellor Liz Sokol says that regardless of policy, education is the first step in preventing sexual harassment.

“They are the ‘weaker sex,’” Sokol said. “I think that despite gender equality and feminism and all that kind of stuff, women don’t feel that they have the same authority, in most cases, as men.”

An increasing number of women from around the world are taking to social media as a way to share methods for warding off harassment.

Débora Adorno of Brazil created a viral Facebook post last month that has come to be known as the “toothy face” photo. Adorno advocates making a humourous face at catcallers as a tactic for deflecting unwanted comments.

Humber student Shaniece Robinson said she has seen the face on Twitter but she doesn’t think she would ever use the method personally.

“It’s a good thing, but it’s kind of creepy,” Robinson said. “I wouldn’t even do it to my friends.”

Sokol says the way women react to catcalling depends on the specific person and their comfort level.

“If women aren’t concerned with being feminine or appropriate they may say the crude thing or the slightly hostile thing,” she said.

For many students in their pre-20s or early 20s their esteem is centred on appearance, said Sokol.

Students may have mixed feelings on how to react to this type of harassment because on one hand they may find it degrading, but on the other hand it can be seen as a compliment, she said.

Humber College released its new campus-wide sexual assault policy on March 27, which includes a zero tolerance policy for any form of sexual harassment on campus.

Sokol said that while policy is a step in the right direction, education comes first. Most students may not even know that the policy exists, she said.

“You have to educate people as to why this is inappropriate behaviour, what it means and how it feels,” she said. “Then at some point, look at some kind of policies that are publicized and simple.”

Jessica Bowen, the Human Rights, Equity and Diversity Advisor at Humber College, said aside from the new sexual assault policy, the college engages students in a number of events to demonstrate their commitment to ending all forms of violence.

The Centre for Human Rights, Equity and Diversity also creates information tables, available online, which include preventative data on various forms of sexual violence and harassment.

“All members of the Humber community have a responsibility to interrupt harassment and a lot of that (stems from) being more than a bystander,” said Bowen.