Cautious Taser use by police urged for confrontations 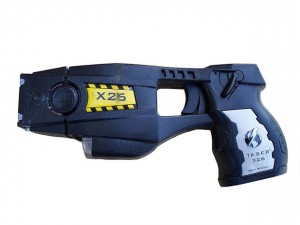 Policing involves split-second decisions, but an important skill is to learn how to buy time.

“If you need to stop someone for their own and your safety a Taser may be the best way to do it, rather than waiting for 15 or 20 minutes and trying to talk it out,” said Henri Berube, Humber’s police foundations program coordinator.

“(Talking) would be a preferable option, but it’s not always the option you have.”

He said when an officer faces the threat of violence by someone who has an edged weapon, it’s hard to devise a separate response for those who suffer with mental health issues.

“With that being said, if you can identify that the person has mental health issues prior to the confrontation, there may be better ways of responding,” said Berube.

Humber counsellor Andrew Tibbetts said emotions are contagious and the only way to override automatic emotional responses is adequate training.

“We have a primal defence system and we evolve to survive in tough situations, but in the modern world we have to bump into strangers all the time and we can’t be sure of their emotional situation,” he said.

Tibbets said when facing the threat of violence in confrontations with an individual who may have a mental illness, proper training would still allow for de-escalation techniques to be used to avoid the use of force.

“Obviously, it’s preferable to being shot,” he said. “But, even more preferable is not to have to use anything at all and that’s why I think with really good de-escalation training we might be able to save things like that as a last resort.”

Steve Tuttle, vice president of communications for TASER International Inc., said the main benefit of the device is its effects are immediate and it safely and effectively stops a threat in a way that is less injurious to the suspect.

“It stops somebody for a five second period of time in which they can’t do coordinated action,” he said.

Tuttle said the Taser is the most misunderstood use-of-force device.

“The primary goal is for an officer to achieve their window of opportunity when dealing with a person that is threatening violence to the officer, themselves or others,” said Tuttle. “The recovery for the person it’s used on is almost immediate.”

Berube said Tasers allow for possible non-lethal intervention and if Ontario officers are allowed to carry them, there would most likely be a decrease in the incidents where firearms are used.

“If you’re going to carry it, you have to be trained for it, it has to be reliable and the public has to know that there is potentially still some danger with it,” he said.

Berube said the Humber program doesn’t provide training for the proper use of devices such as the Taser.

He said police colleges or training centres give information on current standards and training on the effective application.

“Everything from racism and sexism to dealing with mental health issues is discussed and creates a better and deeper understanding for the students towards the challenges and struggles that people face, and hopefully builds some empathy,” he said.

Berube said the process of applied learning includes teaching awareness of current issues and getting experts to share their experiences and introduce students to the critical thought process involving complex issues, a necessary requisite before being involved in a situation.

“You’re giving the student a balanced view from all angles,” said Berube, “from the individual facing a challenge such as mental illness, (to) the police perspective of having a job to do, and then from an oversight perspective of what can happen if you abuse the powers of arrest and search or deviate from the Ontario Use of Force model when doing that job.”

“We have to be trained to learn when it’s necessary to go against what we might instinctively do,” he said.

“If someone is upset with, you it’s a natural response for your body language to get defensive, and that may read to the other person as aggressive,” said Tibbets. “If you don’t interrupt this process, it’s just natural that things will escalate.”

Tibbetts said remaining calm and composed is crucial in setting the tone in confrontational situations.

“It’s definitely doable. My attitude and my presentation can set the tone and the other person can be calmed down,” he said. “People don’t want to be upset so there’s a lot you can do to ease their worries and deescalate the situation before the use of force is necessary.”

Tibbetts said a provincial standard for de-escalation training used by the healthcare industry to manage and prevent aggressive behaviour might be transferable to policing. He said Code White training, such as may be used in hospitals, focuses on effectively using words, tone and body language to de-escalate tense situations.

“If things are going to change, it’s crucial that experts in the area are involved in the training,” said Tibbets.