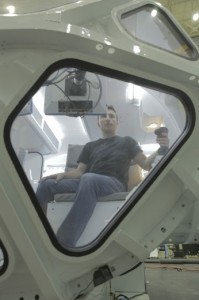 Mission Asteroid brings the threat of asteroids to the forefront. COURTESY JEFF THRASHER

Asteroid threats are no longer just a thing of sci-fi movies.

Humber alumni Jeff Thrasher’s documentary, Mission Asteroid, introduces viewers to the threat of deadly asteroid projectiles and the team of astronauts and scientists who are looking to prevent them from hitting Earth.

Thrasher, 34, graduated from Humber’s television writing and producing post-grad program in 2006. He still returns to Humber to give lectures on his experience in the industry.

Thrasher came across the project when one of his friends from NASA, whom he had worked with for a previous project, said he would like to work with Thrasher again.

“I went out to California and sat in a coffee shop for a couple days and picked his brain on what [NASA’s] big steps are,” said Thrasher. “This stood out from the rest.”

The fireball that exploded over Chelyabinsk, Russia, in February was a wake-up call. Asteroids have the ability to destroy cities and wipe out species, yet there is no dedicated technique or specific team assigned to deflect them. Mission Asteroid makes these issues real.

“We used to think the primary threat was from these great big asteroids,” said William Ailor of The Aerospace Corp., which provides independent research, development and advisory services to national security space programs. “We’re beginning to realize if [the Chelyabinsk fireball] had come in a little steeper, it could’ve destroyed that city. These smaller asteroids are really part of the threat, and these little ones we see even more frequently.”

However, the threat does not stop in Russia. Asteroid threats are an international issue and there is a push to treat them as such.

“There’s an element of global danger,” said Thrasher. “Our species as humans is in trouble, but there’s also a really big push with NASA to try and stop that from happening.”

While experts know where the major and more dangerous asteroids are, they’re headed in the right direction on a long road, said Randy Attwood, president of Earthshine Astronomy and Space Science Organization.

“A lot of people say the dinosaurs aren’t here right now because they don’t have a space program,” said Attwood, whose non-profit organization develops astronomy education and outreach activities in the greater Toronto area. “It’s the same for us. There’s nothing to prevent that from happening right now.”

However, research being done now may benefit the generations to come.

“What if it was in 100 years?” said Attwood. “We’d have to have some mechanism to prevent that from happening. It’s a long term effort to figure out the best way to protect us.”

More than 200 experts, including engineers, scientists and astronauts, gathered for the 2013 IAA Planetary Defense Conference: Gathering for Impact! in Flagstaff, Arizona in April. The event, which was featured in Mission Asteroid, brought together world experts for an exercise: a hypothetical asteroid impact threat and the mitigation measures that could take place. NASA, the European Space Agency and the Russian Federal Space Agency were just some of the conference’s sponsors.

Proposed deflection techniques included nuclear explosives to break up the asteroid, or the use of a kinetic impactor, an object that would act as a battering ram to push the asteroid off its path. A kinetic impactor was successfully used during mission Deep Impact in 2005.

Several factors, such as the amount of time left until impact and asteroid size, affect the deflection technique needed, said Ailor, who was also co-chair of the Planetary Defense Conference organizing committee.

As for what’s next in planetary defence, organizations such as NASA have proposed to test the capabilities of some of these techniques, said Ailor.

Canada has gotten involved through the launch of its NEOSSat microsatellite earlier this year, said Attwood. The microsatellite, which is about the size of a briefcase, acts as a telescope and will be searching for near-Earth objects of any size. This project will assist in the worldwide effort to identify and catalogue objects like asteroids.

Mission Asteroid also gives viewers a first look at the mining of asteroids for platinum and other valuable minerals. This is the first documentary that looks at private companies looking to get into the asteroid industry, including billionaires and entrepreneurs such as the Google owners, Canadian film director and explorer James Cameron, and Planetary Resources chief engineer Chris Lewicki.

“I approached it [as if] it was a poetic thing,” said Thrasher. “Asteroids are essentially the biggest threat to Earth, but also potentially our salvation. If we can deflect them and harvest their resources, it’s a bit of a double-edged sword.”

Aside from international cooperation, further funding and an authoritative system specifically for assessing asteroid threats, the IAA suggests planetary defence should be a specialty of its own. According to the IAA Planetary Defense Conference white paper, planetary defence is not just a branch of astronautics, and it should be made a specialty area in university programs.

Mission Asteroid was produced by First Canyon Media, a Toronto-based production company created by Thrasher and Joel McConvey, which focuses on nature and adventure projects.

Some of Thrasher’s past works include Canadian Pickers, Survive This!, and works for National Geographic, History Television and the BBC.

Mission Asteroid will premiere on CBC’s DocZone on Dec. 5.

Humber welcomes “The Breath of Distance”