Celebrating the life and photography of Nicole Turcotte 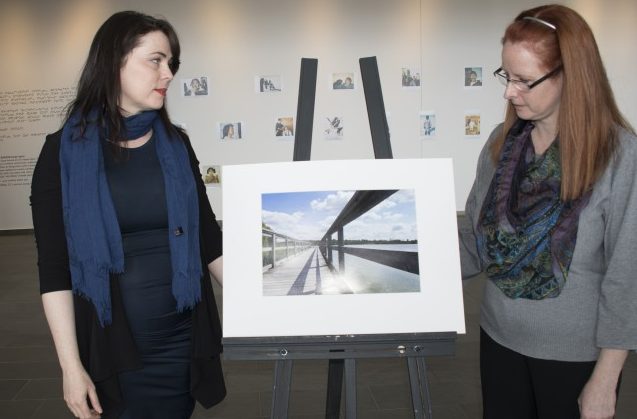 Brandy Sommer Wood and her aunt Heather Turcotte attended a memorial for photography student Nicole Turcotte at the Learning Resource Commons atrium at North campus on April 5. Nicole, 22, died in hospital after a traffic collision on the QEW near Cawthra Road in Mississauga in January. (Kasie DaSilva)

Heather Turcotte studied the photograph of a chickadee and a tiny smile formed but it couldn’t stop her eyes from tearing.

She was looking at the last picture her daughter Nicole took before the 22-year-old Humber creative photography student’s life was cut short when she died in hospital after a horrific collision on the westbound QEW near Cawthra Road on Jan. 27.

Nicole was a wonderful daughter, a talented photographer and a loving friend, mom Heather said during the one-day photographic memorial Wednesday at the atrium of the Learning Resource Commons at North campus.

Creative photography program coordinator David Scott had been planning a memorial for Turcotte for months now. Celebrating Nicole’s passion for life and her love for photography was the main goal of the memorial exhibit in her honour. There were about two dozen examples of her work on display.

“We took things from Nicole’s life that she cared about and we’re celebrating them,” he said.

The memorial, which featured her photography, showed her love for nature and documenting the surroundings around her.

“She was always into photography,” her mom Heather said. “She would always take my camera and click pictures. And when I would have to take it in to get the pictures developed in the old days, I would say, ‘where did this picture come from? Oh yes, Nicole.’”

Nicole’s cousin Brandy Sommer Wood was one of many friends and family members who celebrated her life at the memorial. She admired her aunt, Heather, for being so strong during this time.

“Nicole’s mother is a very strong woman, but grief comes in waves,” she said tearfully. “But every time I talk to her she believes she will be with her again one day.”

The event was not only important for their family, but also for her classmates.

“I think it is as important for the students, and that is part of the reason that David wanted to do this. This class here has suffered more than one loss throughout their two-year course,” Sommer Wood said. “Honouring Nicole in this way is a way to process their grief and for them to move forward.”

Despite Nicole not physically being there, her family will be in attendance at convocation this spring in her honour.

“Two of the photographs from here today, will be put in the creative photography graduate show and my aunt and I and her partner will also come for the graduation,” she said.

Scott met up with Sommer Wood beforehand to go through her photos that they wanted to display at the memorial.

“Being here is just incredible, it’s like seeing through her lenses,” she said.

The creative photography program students and faculty were in disbelief when hearing that they lost one of their classmates.

“It’s shocking to hear that someone who is 22 could suddenly just not be there. The shock was followed by sadness and tragedy,” he said. “You really don’t know what to do or think after something like this.”

Scott said that he will always remember Turcotte for her thoughtfulness towards her work.

“She had a very good sense of design, she always thought of composition and perspective, (she) always had a good eye for composing an image,” he said. “she always had a camera with her and would always like to go out and be looking for an image.”

Turcotte was most well known for her realistic photography style.

“You could say minimalist, documenting places, objects and always capturing the essence of things,” Scott said.

He is still in disbelief about the crash, and how it could have been easily prevented.

“Just the needless (aspect) of it, that it was caused by some guy on the road causing an accident,” he said. “It just made it so much more pointless and sad.”

The five-vehicle crash also left six others injured, one critically.

Baig was placed on $52,000 bail after surrendering to OPP traffic investigators in February.