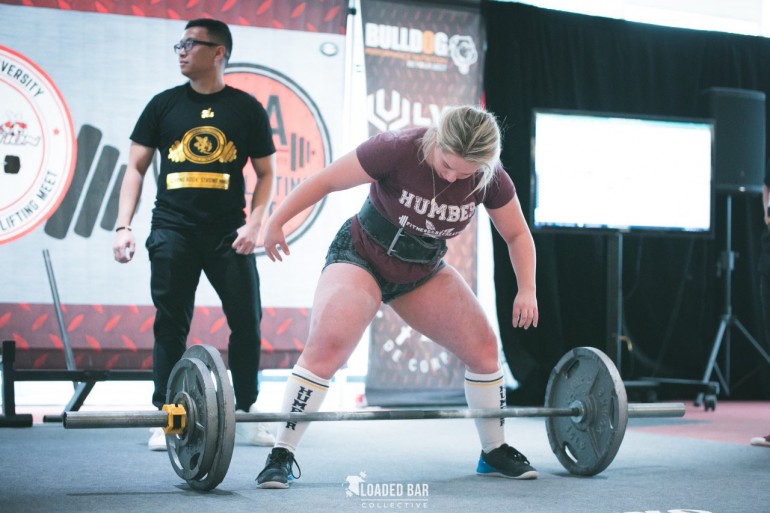 Destiny Brennan thought she had back problems.

Brennan, a behavioral science student at Lakeshore, said she was hesitant about joining the team after sustaining a back injury earlier in life.

“I was kind of scared to try out, I had previously had a back injury and was a little bit afraid that I would hurt myself again,” she said. “It was something I really wanted to do, so I did it. I didn’t think I would make the team but just see what would happen.

“I got in and loved every minute of it. So just do it and regardless of what happens it’s a great learning experience,” she said.

Nathania Brun, fitness and recreation coordinator at Lakeshore campus, is the person who brought the sport to Humber.

She has been a part of the sport’s growth from the start and it was the first time the co-ed team had tryouts and coaches helping the athletes with regular practices.

“We never really had an official team, one we didn’t have the space because we run it through the Lakeshore and we didn’t have a squat rack until two years ago,” Brun said.

“When we got our new (athletics) building (at Lakeshore), we wanted to establish more of an official team with our extramural,” she said. “There was an extramural power lifting meet at Seneca, we would do a shout out to say hey is there any power lifters who want to represent.

“We never really had a team per say where they had practices and such,” she said.

The new facility and with of coaches, the powerlifting team was able to create a healthy environment to grow in the sport. It was a place where these athletes in an individual sport could make friends along the way.

“This year we hired some coaches and set up sometimes on Sundays to do regularly practices, and had try outs for the first time,” Brun said. “This year was this first time we were establishing more of a formal extramural power lifting team.

“They have come together as a team, knowing their teammates and getting to practice together. It creates a family environment. It established something different from the previous years,” she said.

Brennan, who works with Humber Athletics, heard from a co-worker about the team and after overcoming trepidations about her back she decided to give it a shot. A year later, she loves the experience and made some friends along the way.

“My personal experience with all the women there was awesome, it was a lot of fun, they’re super supportive and…I’m still talking to some of the girls who competed,” Brennan said.

Although powerlifting is an individual sport, the team has a family-like environment, she said.

Brennan said the way athletes are ranked through a system called Wilks, which compensates scores in competitions with no weight categories, and also compares male and female lifters.

She said the team competed in February at Seneca.

“How we do that is you weigh in, and count your Wilks score. It’s based on how much you can lift compared to your weight,” Brennan said.

“You then do your lifts and you have three opportunities to do your lifts,” she said. “The first one is called your opener, a weight that would be easy for you.

“On the third lift is your personal record, the heaviest you have ever done and that is the same for each lift,” Brennan said.

“At the end they go through everyone’s score and hand out awards first, second and third.”

Brun and Brennan both said the team isn’t necessarily looking for the heaviest lifter. It’s more about being able to take feedback and grow through training and competitions.

“Each year they have tryouts, it’s not necessarily about who can lift the most. It’s basically if you have knowledge of the three lifts which are squats, deadlift and bench press,” said Brennan. “The biggest thing they look for is ‘coach-ability,’ if they can give you feedback and you can take it and learn from what they said.”

Brun said it’s important to find those who are coachable and wants to be in that team environment.

“Powerlifting is an individual sport but coaches were looking for people who were positive, wanting to grow, coachable, an overall positive attitude towards the sport and also dedicated to coming to regular practises and investing their time at Humber,” Brun said.

Tryouts for next year’s powerlifting team is in September and dates will be posted around mid-August on the team’s Facebook page and website.