Coconut oil has earned itself an inspired reputation as a multipurpose health and beauty product that promotes weight loss, prevents aging, fights infection, inhibits disease, and nourishes skins and hair.

But while some are singing its praises, others are shrugging off coconut oil as just another fad.

“If you look at the evidence that’s out there it’s quite inconclusive in terms of it being deemed a miracle cure for a ton of diseases,” said Maria Pelliccia, registered dietician and professor at Humber College. 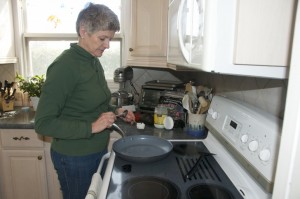 Kendra Hamilton
Among many uses, coconut oil is effective in high-temperature cooking.

Much of the evidence showing the positive effects of coconut oil is anecdotal and there is no scientific confirmation to support the claims, she said.

This is a problem because ingesting more oil means ingesting more calories that adds more fat to the body, which can have negative consequences, she explained.

There is conclusive evidence indicating extra fat on our bodies is linked to chronic diseases, such as cancer, cardiovascular disease, Type-2 diabetes, arthritis and high cholesterol, said Pelliccia.

“There has been some research to suggest that coconut oil does not make the bad cholesterol worse, like other saturated fats would, and it may actually improve the good cholesterol. However, that hasn’t really been concluded by any other studies,” said Pelliccia.

“Coconut oil is antimicrobial, antiviral and antifungal,” he said.  “It increases intestinal health and fights viruses.”

Coconut oil is a natural remedy that is safe to take everyday because it’s gentle on the system and has fewer side effects than pharmaceutical drugs or more potent natural remedies, like oil of oregano, said Mercer.

“I use it as a moisturizer, I use it on my lips and I use it internally for candida related issues (yeast infections),” said Danielle Posavad, 27, an account executive at IMD Health Canada and an avid coconut oil user.

Posavad’s mother, Eve, 61, said she has been using coconut oil on a daily basis for a few years because it “heals you from the inside out.”

“It’s maintenance,” she said.  “It’s not like, ‘Oh, I have diabetes, I’m going to take coconut oil and get all better all of a sudden.’ No, it’s prevention and it keeps you healthy.”

“To say that it boosts immunity, that’s pretty powerful, and I have not come across any literature to support that,” said Pelliccia.

“The main positive is that it is plant derived and it doesn’t have any cholesterol,” she explained. “It is ultimately better over butter or any trans-fat.”