Tickled in 10 minutes; comedy students and their ‘Taken’ viewers 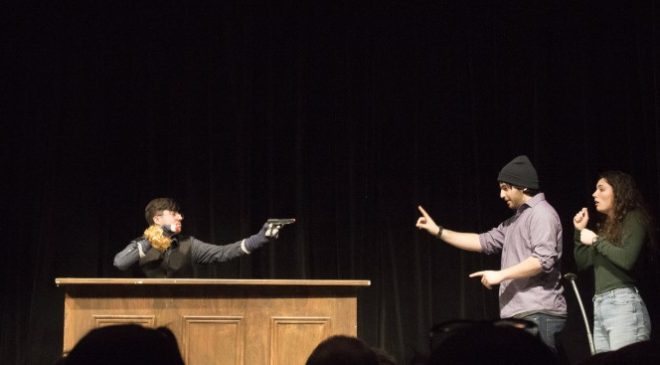 Despite a few hiccups during the live performance, comedy student Luisa Rubio was proud of the 10-minute play she wrote.

She was among the second-year Humber College comedy students who put on a Ten-Minute Play Festival on Feb. 14 and 15.

The comedy program is a tightly knit troupe of 30 students divided into three sections. The first night of the festival featured nine plays, and the second-year comedy students put their skills to the test.

They generated laugh after laugh from the crowd.

The plays ranged from a group trying to escape a malevolent murderer’s torture chamber to two half-brothers hilariously bonding over personal issues.

Rubio’s play, Spiritually “Taken”, was the final work Wednesday night. The play was a twist on the movie “Taken”, where the protagonist struggled to stick to the script while practicing his lines on set.

After over a month of writing and perfecting the script, a few lines were notably omitted from the live performance. But the audience barely cared and laughed it off.

“I thought to myself, ‘Oh no, no, no,’ I want everyone to hear it! The lead actor Cale saved it though. But I mean if you write something, you want people to hear it,” Rubio said.

Students had less time than usual to prepare because of the strike earlier in the year.

“I was very happy with the end result — especially with the timeline that we had to work under, which was compromised by the five-week teacher’s strike,” said Shawn Campbell, a comedy teacher and director of the festival.

“I think most of the plays had their best runs in front of the audience on both nights,” he said.

With the semester winding down, the second-year comedy students must now switch their focus to their end-of-year performances. The students will write and perform sketches for a Sketch Show at The Comedy Bar at the end of April.

Once that is done, some of the best performers will be invited to showcase their works in The Industry Show at Second City in May. The show will also incorporate eight stand-up comics from the class.

Rubio isn’t sure what she plans to do after graduating this summer, but she hopes to continue writing sketches and plays.