While the restaurant’s menu features locally produced organic foods and has a balance of both rich and healthier dishes, the TV program showcased the most decadent dishes on the menu such as pork belly perogies, bacon wrapped meatloaf and butter tarts.

“I don’t know where it started, but these shows run marathons, every episode has pulled pork, they seem to go for the outrageous factor,” said Kane.

She said all the foods featured were high in saturated fat, salt and sugar. “You’re not really helping your body out by eating these types of food all the time,” said Kane.

Barley Vine’s head chef, Jason Cooney, a graduate of Humber’s Culinary Arts program, admits there is not much health benefit from the dishes featured on the show, but said that people seek out these foods to make them happy. 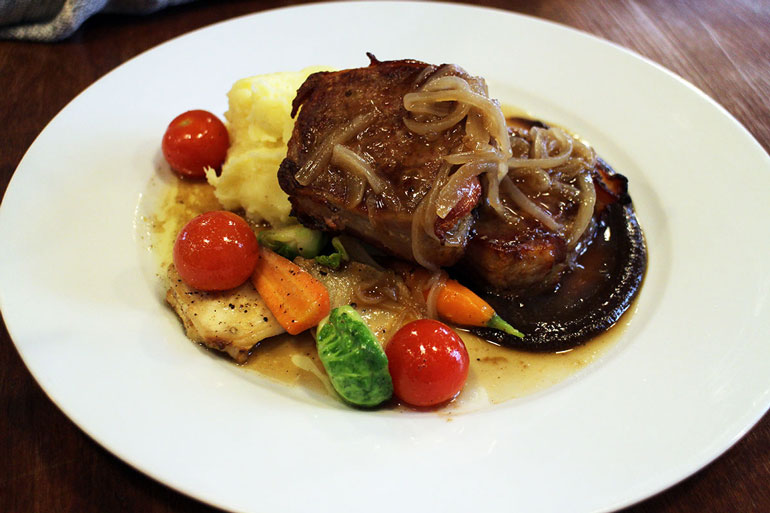 One of the special items customers are treated to at the Bistro.

“These foods strike that chord with people, it’s a very pleasing feeling if they can associate the food with a childhood memory,” he said.

Cooney said although the Barley Vine was given national attention for its most indulgent dishes, the restaurant also maintains a balanced menu with all recipes being produced from fresh local ingredients.

“As much as I’d like to say we are a comfort food restaurant, if we only served those type of dishes we would push away a lot of customers,” he said.

“We incorporate foods like kale and quinoa on our menu and vegetarian dishes. We have a nice balance.”

Kane said she has been to Barley Vine and enjoyed the beet salad, which had local ingredients and a light sauce.

“Then when you look on the show that isn’t what they are featuring,” she said. “The show made the menu look worse than it is, but that kind of food is what people want.”

Kane said the most important health issue with eating in a restaurant is the added salt and butter during each step of preparation. This wouldn’t normally be a part of prepping a meal in the home.

Humber’s Health and Fitness program coordinator, Nathan Campbell, said “The media focuses on these unhealthy foods because of the trend of an unhealthy lifestyle, obesity and diabetes being a problem, all preventable, but we still have these kinds of foods that people keep coming back to.”