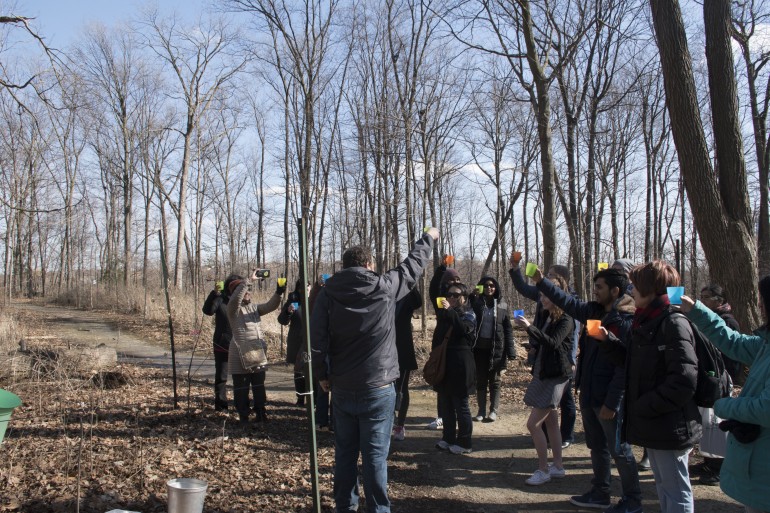 People toast to spring with maple sap during the Arboretum walk. (Vrushali Mahajan)

Among the hundreds of maple trees in Humber’s Arboretum, there’s one older than the country. And that tree, which is about 300-years-old, helps supply the sap for some of the maple syrup used by Humber culinary students.

“Out of the total maple syrup production, 30 per cent of it goes to the Humber Culinary Arts school for their preparations,” said Jimmy Vincent, coordinator of Education, Camps and Community Outreach walked people through Humber Arboretum’s sustainable urban sugar bush.

He said the other 70 per cent is sold to the general public.

Vincent said syrup production varies annually and about 30 to 40 litres of maple sap is required to make about 200 ml of maple syrup.

And best of all, people got to taste a little maple sap after watching the process of sap being boiled down into syrup.

“There are about 90 different trees which we can harvest at this point of time. Including all the saplings it could be around 900 in total,” Vincent said.

Maple syrup takes about, depending on the temperature, two to three days to form, Vincent said. “So after tapping trees, we put them into evaporators and let them boil so that the excess water evaporates,” he said.

He said there is a particular age when to harvest sap from a tree to harvest, maybe a year or two because we don’t want to stress the tree for our needs.

“We can even harvest it every year and it won’t harm the tree whatsoever,” Vincent said.

“One of the advantages of rotating is that you are not loading it up for sap holes as well because once you start putting sap holes, it becomes difficult to sap the trees with too many sap holes,” he said.

“We need to see this in a sustainable manner, we don’t want to exhaust the tree by continuously tapping it for 10 years but we can make it last longer if we take breaks,” Vincent said.

During the walk, he spoke about how Humber woodlands fall into Environmentally Significant Areas due to the presence of special species found.

“These terrestrial surveys are conducted by the Toronto Region Conservation Authority and there are about 86 of such areas within Toronto,” Vincent said.

“We have the White trout lily, Christmas fern, Canada water lily and many such species which make this forest a special land,” he said.