The same game, same equipment, and the same dedication but a different venue. The Hawks’ curling teams have changed their home arena.

After spending years at the Weston Golf and Country club in Toronto, the teams moved to the Dixie Curling Club in the Dixie Road and Dundas Street area of Mississauga.

The transition from one venue to another has been a smooth one. 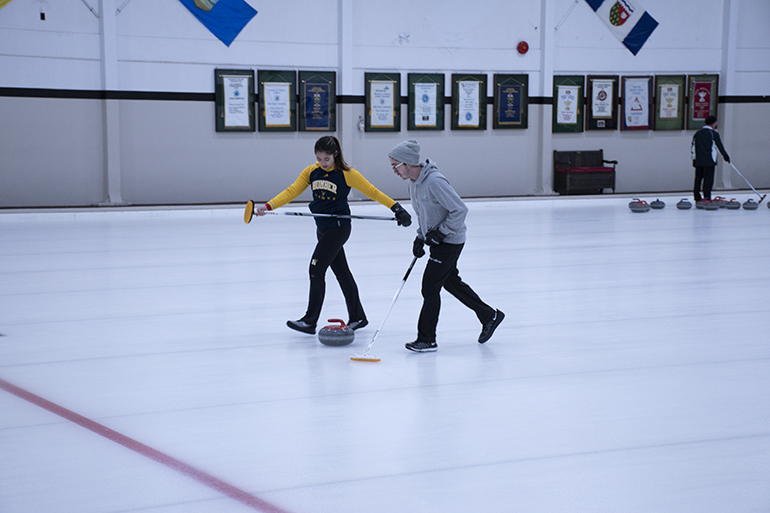 The Humber Hawks curling team tests out the ice at their new rink the Dixie Curling Club. (Jacob Phillips)

Fifth-year curling team member and skipper Cassandra Paccanaro said the ice and rocks are slightly different in both locations.

“The ice here is really good and consistent,” she said. “The ice was very good at Weston, also. They’re both similar but the rocks they have here are very new compared to what they have at Weston, so it makes playing a bit better.”

“Since the rocks are so new, they move faster when we’re throwing which makes them easier to play with,” Paccanaro said.

The try-outs looked busy as many male players showed up to play. However, only a handful of players came out.

“The women’s tryout didn’t have a lot of players signing up. For the past couple of years, it’s been like that,” Paccanaro said.

“This year we had six female players come and try out, last we had five and we’re at the bare minimum to make a team.”

“Every year there’s been like 12 dozen guys trying out and this is our fourth practice so far this year,” he said.

Armstrong said the female tryouts and the low turnout only depends on whether the students at Humber are interested in curling.

“It’s just a chance of people going to Humber who want to play curling and so far, the men have gotten more people wanting to sign up,” Armstrong said.

Co-head coach Sean Turriff said he was pleased with the outcome of the try-outs and believes he has a strong team. “We have a few new players who are pretty talented. Let’s see how they perform on the ice,” he said