A cross-country dream got its start at Humber and took a big step on Jan. 24 at The Central Bar in downtown Toronto.

Third-year Film and Television student, Nicholas Posthumus, and Marco Carboni, a graduate of the Television and Broadcasting program, were both studying at North campus when they conceived Current Sessions, a series of video profiles of Canadian bands.

“We work exclusively with Canadian (musicians) and we want to show where these artists grew up, where their music was inspired and how their art was formed” by those locations, Carboni, 21, said of their project.

They have released eight videos so far on their website, with Toronto acts such as Birds of Bellwoods and Future History. They recorded the entire show featuring local Toronto artists such as Emma Hewson, Kenisha Humber, Birds of Bellwoods and Rory Taillon, at The Central Bar on Markham Street in Mirvish Village and plan to release a series of videos from the footage in the near future.

Their dream, however, reaches well beyond the GTA.

“Our ultimate goal is to eventually take this Toronto-based project and go across the entire country,” Posthumus, 21, said.

“The big goal is to take Current Sessions across the country and make it a national sound and not just a Toronto sound,” he said.

For now the pair are taking it slow and building their presence in the city.

“The second that I’m done school we’re really going to dedicate a lot of our time to making the company really solidified in Toronto and really establish ourselves,” Posthumus said. 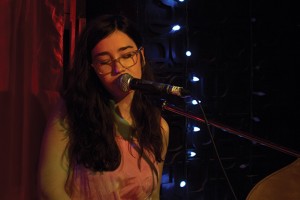 “I would love to work with them again,” Emma Hewson, one of the night’s performers, said of Current Sessions. She’ll likely get her chance soon as plans were set in motion that evening for a session of her own.

Both Posthumus and Carboni gave the same answer when asked who would be the ultimate cap to their trans-Canada dreams. Current Swell, a four-piece band out of Victoria, B.C., is the group the pair bonded over and the inspiration for their company’s name, Carboni said.

“If we could someday end up on the coast and run into (Current Swell) and record a video with them, we could look at each other and we would know that … we’ve accomplished everything we’ve set out to do,” Posthumus said.

People can check out Current Sessions’ website at www.currentsessions.com.