Dickson fights out of ineligibility to get back on the court 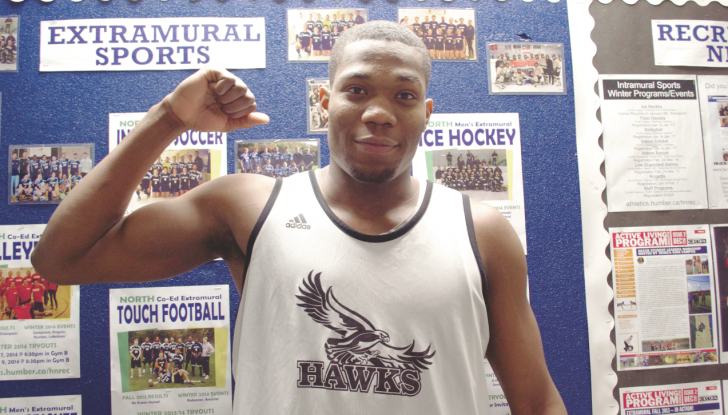 Tyrone Dickson is back with the Hawks after a semester of ineligibility. (Willy Phan)

Hawks’ men’s basketball forward Tyrone Dickson knew he had to improve his grades if he wanted to get back on the court.

Despite experiencing enormous success as the OCAA Rookie of the Year in 2012-13, Dickson sat out last semester due to academic ineligibility.

In order to achieve success off the court, Dickson made significant strides in his approach to the classroom at Humber College.

“I moved closer so I was able to reach my classes on time and to always be at the front to pay attention, listen and make better improvements,” said Dickson, a second-year general arts and science student from Scarborough.

“He’s worked hard in the offseason and first semester to right the ship off the court,” said Hawks head coach Shawn Collins. “As an institution of higher learning, we always want our kids to do well on and off the court.”

Although Dickson didn’t play or practice with the varsity team last semester, he stayed close to his teammates by playing with them in pick-up games and in a summer league.

“He’s loud on the court,” said Hawks guard R.J. Ramirez. “Every time we play someone, I know their game film is on

Tyrone and his shot-blocking in the paint. He’s not the type of player to come to the team and mess everything up. We gel perfectly because he knows his role and we all know his role.”

Despite only playing in a few games for the Hawks this season, Dickson has made an impact on the score sheets with his defense and rebounding.

Dickson showcased his tenacity on the glass by grabbing nine offensive rebounds and delivered an emphatic game-saving block at the end of a 76-72 win against the Mohawk Mountaineers on Jan. 16. He was also an integral in a Hawks win over the Fanshawe Falcons on Jan. 22, chipping in three blocks despite playing only 15 minutes.

“We needed those offensive rebounds and he came through for us with some big blocks too,” said Hawks guard Junior Davis.

Despite his humble nature off the court, Dickson is known for his vocal leadership, aggressiveness inside the paint, and intangibles that can’t be measured on the score sheet.

“Tyrone has a very high level of I.Q.,” said Collins. “He doesn’t need to score to define how he plays the game of basketball.”

Collins praised Dickson’s ability to understand the opposition, help and direct guys, and communicate on defense.

Aside from working hard in the classroom, Dickson was also committed to staying in game shape last semester.

Dickson acknowledged there are still improvements he has to make this season. His field goal percentage is noticeably down from last season, which has impacted his scoring.