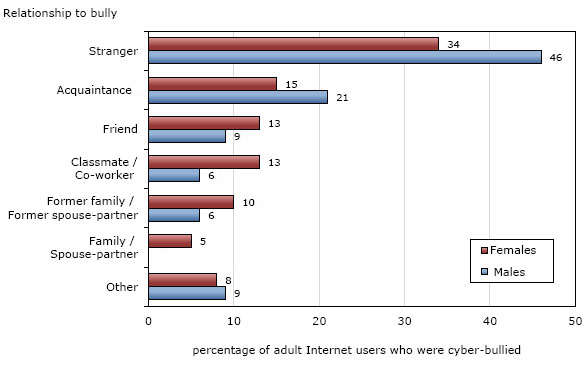 STATS CANADA
A 2009 graph from Statistics Canada shows that most people are cyberbullied by complete strangers.

A new bill has been proposed in Ottawa that aims to curb cyberbullying by making it illegal to share explicit images without consent.

The issue of online harassment and bullying gained nation-wide attention earlier this year after the death of Rehtaeh Parsons, a Nova Scotia teen who had images of her sexual assault shared over the internet. Amanda Todd, a British Columbia girl who also committed suicide under similar circumstances, is another case that has led to this push for stronger legislation.

A study released in 2013 found that there was a flaw in existing laws that made it difficult to apply criminal sanctions specifically to cases like the Parsons suicide. The study suggests that officials be given more investigative powers to help them with prosecuting cyber bullies.

“Our Government is committed to ensuring that our children are safe from online predators and from online exploitation. We have an obligation to help put an end to harmful online harassment and exploitation. Cyberbullying goes far beyond schoolyard bullying and, in some cases, can cross the line into criminal activity,” said Peter MacKay, the Minister of Justice and Attorney General of Canada. He introduced new legislation to address criminal behaviour associated with cyberbullying.

“With the click of a computer mouse, a person can be victimized before the entire world. As we have seen far too often, such conduct can destroy lives. It clearly demands a stronger criminal justice response, and we intend to provide one.”

With the proliferation of social media and online activity, especially amongst teens, this issue does not come as a surprise to many people. However, some feel that it isn’t necessarily a generation specific problem, and since bullying has always existed, this is merely a new tool available for bullies to take advantage of.

Nichole Cottrell, 19, a first-year general arts student at Humber said she feels that no matter what the avenue, bullying will always exist and these laws won’t make a huge difference.

“As far as preventing it, I don’t think you really can because there’s always going to be those kids with low self-esteem that are looking for someone to pick on and it just seems easier to bully someone over a computer than in person,” she said.

“Realistically some kids don’t have anything better to do with their lives than to pick on other kids to make themselves feel better.”

Some feel that having a thicker skin as well as avoiding social media websites is the answer and the law should only step in for serious cases.

“I think it’s a big issue, but it should only be considered bullying if it’s persistent and malicious. At some point the victim should just delete their Facebook account and take the tools away from the bully. Whether in person or online, it’s going to happen regardless,” said Aryan Ghahremani, a first-year law clerk student at Humber.

Bill C-13 is expected to pass but experts are still divided on the actual effectiveness of such legislation, with many feeling the definition is too narrow and won’t have a large influence on rectifying the problem of cyberbullying.