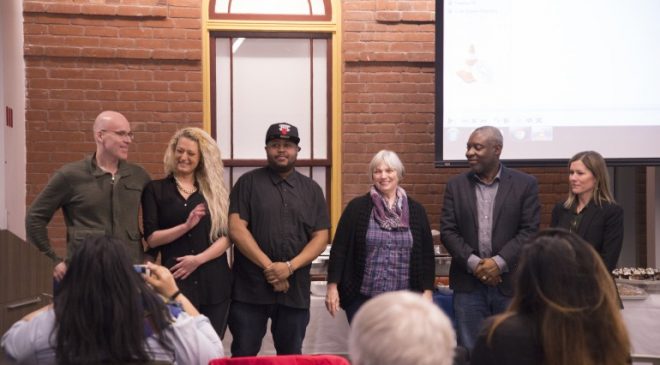 Humber police foundations professor Arun Dhanota wants the next generation of police to look at Regent Park in a different way.

The high-risk neighbourhood in east Toronto and two of its residents were the focus of a new documentary, Regent Park, Dhanota’s brainchild, which premiered Feb. 8 at Humber’s Lakeshore campus.

The story follows the journey of the young men through the criminal justice system in Toronto.

The film is a collaborative project between Humber’s Police Foundations program and Centre for Teaching and Learning. Notable community agencies such as Springboard Services and Pathways to Education also assisted in the documentary’s creation.

The tale of two young men, youth Martin’s story begins with hope as he tries to turn his life around working with social workers. It apparently doesn’t end well for him.

The second young man is residential support worker Hamid Mjasiri. He too was caught in the justice system but he turned his life around and now works in troubled communities acting as a mentor, public speaker and as a support worker.

Dhanota says the documentary stresses success and compassion and is based on building relationships between communities and the police.

Building partnerships in the community and throughout the system was integral to the documentary’s structure, she said.

With the film, students in the Police Foundations program will receive a very different learning experience than others engaged in a traditional case-based learning approach, Darren Richards, manager of Creative Productions at Humber’s Centre for Teaching and Learning.

“Using a case-based teaching and learning method, we are able to transform a traditional case that a teacher would typically use in their class into a digital one, providing greater insight and intensity to the problems being presented,” he said.

Creating the documentary was part of a grander objective to not only provide the tools for career success but to inspire students and society at large, said Machael Shaikh, Police Foundation’s 2015 alumni and research assistant.

“We do hope that this film will be used to bring change,” Shaikh said. “Change to the criminal justice field, change to the social service field, and change to the challenges that many youths find themselves in on a daily basis.”

Mjasiri said the documentary provides insight into his experiences with the criminal justice system and offers inspiration to strive for a path up to anyone in similar situations.

“We together are success stories that not a lot can escape or have the capabilities to free themselves,”  Mjasiri said. “Be proud of your story, be confident that the future is bright even in dark moments.”