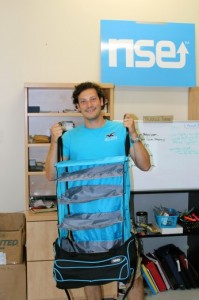 If he had the chance to do it all again, industrial design graduate Lee Renshaw, 29, said he would.

Renshaw received the Premier’s Award, a provincial honour for contributions by college graduates, in the Recent Graduate category, one of the six categories presented to nominated individuals.

He appeared on CBC’s Dragon’s Den in the spring of 2012 with his brother Sean to promote a new travel bag and has started his business, called Rise and Hang.

The company’s weekender bag is designed to hang from the bar in a closet, keeping all clothes neat and clean with shelving, while the dirty clothing goes in the base of the bag.

“I was very surprised, considering there was such amazing nominees from different schools,” said Renshaw. “It does show the kind of drive that Humber students have to succeed in the world.“

Minister of Training, Colleges and Universities Brad Duguid said, “The Premier’s Awards are a great example of how Ontario’s colleges provide students with the expertise they need to pursue their passion and compete in a highly skilled economy.”

“This year’s six winners have made positive contributions in their communities, created jobs for others and helped to attract new investments in the province,” said Duguid.

One of the decisions that led to the creation of Renshaw’s business was his appearance on Dragon’s Den, when he was offered a deal by all four panelists, who loved his weekender bag.

Two of them offered Renshaw and his brother a deal to license the product, while the other two offered licencing and marketing. The pair decided to take the license and marketing deal because of their interest in learning how to build their own business.

“As much as I wanted to do it [license the product], I wanted to learn how to start a company. To start something that the world’s never seen,” said Renshaw.

At least 5,000 bags have been sold within the company’s first year.

Humber’s industrial design program coordinator Glenn Moffatt had the opportunity to teach and work with Renshaw when Renshaw was a student at Humber.

“He’s a very good designer and innovative. He can work independently,” he said.

Moffatt said there have been many Humber students that got the audition for Dragon’s Den, but Renshaw was the only one to appear on TV or make a deal.

Renshaw said the weekender bag would be given out at the 2014 Grammy Awards as gift bags.