Humber North students eager to see art developments at Lakeshore campus can now wheel their way down there thanks to Dropbike.

The Canadian company installed 100 bikes between the North and Lakeshore campuses on Thursday in partnership with the Office of Sustainability. 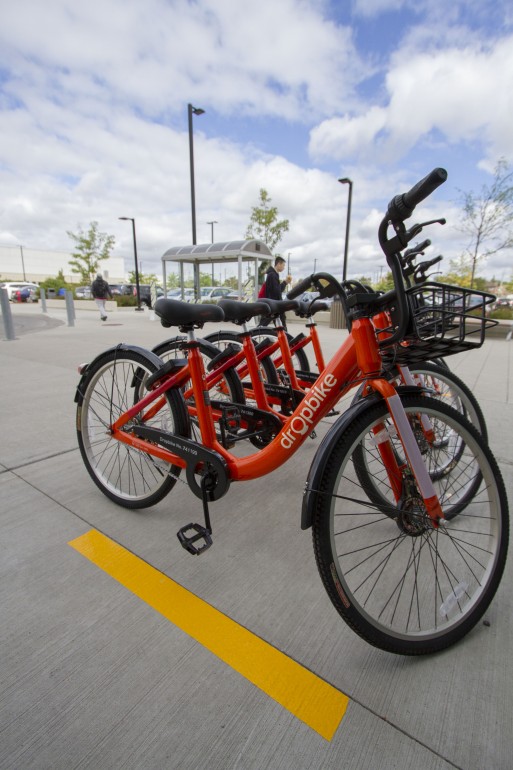 Dropbikes can be unlocked by downloading the app and using a QR code. (Kit Kolbegger)

Dropbike calls its pick-up and drop-off spots “havens”. While there aren’t any havens off-campus around Etobicoke, Meacher said he has hopes about that too.

“Hopefully we’ll expand out to the community but that’s just a matter of time,” he said.

The company also operates in downtown Toronto, Kingston and Montreal.

A survey from Smart Commute last year found most students said they wouldn’t use a bike to go to and from school. However, more than half of students stated would use bikes to do errands during the day.

Roma Malik, the acting manager at the Office of Sustainability, said the bikes would be great for that kind of use.

“If you wanted to have lunch off campus, instead of taking your car out, why not ride a bike?” she said. “Or if you wanted to go to the grocery store and you live on res, it’s a quick way to get around and it’s pretty cheap.”

Dropbike costs $1 per hour. Malik said the low cost was only one of the reasons the Office of Sustainability thought Dropbike was a good fit.

“It’s a Toronto-based startup and the team there uses bikes that are made in Canada. So there’s a bit of sustainability in terms of locally made products,” she said.

Malik said there were other advantages to having a local company providing the bikes for campus.

“Because they’re a local company, they understand the challenges and the logistics with respect to transportation around Toronto. That understanding, in and of itself, was worth a lot,” she said.

Malik said she’s interested in the data the bike share program will bring. She also said she’s excited for feedback from staff and students alike.

Dropbike havens can be found on each campus. The bikes can be unlocked after downloading the Dropbike app. The app can also be used to locate the bikes themselves.