Avery Bird and Theo Willert are gearing up to represent not only Humber, but all of Canada as well, at the upcoming World Skills competition half way around the world.

The biennial competition brings together the world’s top students in a particular trade. Categories in the competition range from highly advanced crafts like mobile robotics to more traditional vocations like hairdressing. 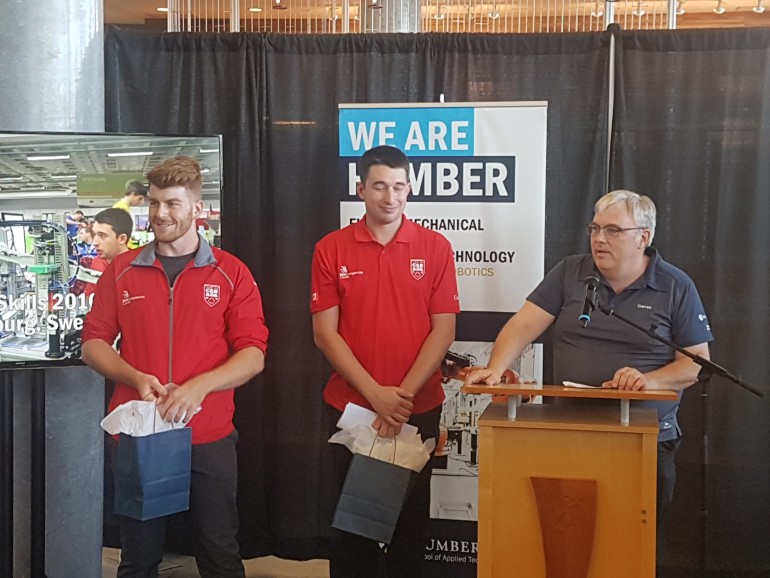 The competition is in essence the Olympics of Skilled Trades.

Bird and Willert will be jetting off in a few weeks to Abu Dhabi, U.A.E., to compete in the mechatronics division of this year’s competition.

Humber is considered a leader in mechatronics education and most students have no problem finding work in the field after graduation.

Wednesday’s tribute to Bird and Willert was both bittersweet in that they’re moving on from Humber and that it was also a celebration of their hard work and years of dedication.

Many students, faculty and Humber executives were on hand to congratulate the two for making it this far and to wish them luck in Abu Dhabi. The event also featured a demonstration of the machinery they have been working on since they began competing in skills competitions four years ago.

After success at both provincial and national skills competitions, both Bird and Willert were thrilled when it was announced in 2016 that they qualified to represent Canada at World Skills.

The two graduated from Humber’s electromechanical engineering technology program last semester but stuck around to continue training for the World Skills.

“We’ve been doing this for four years, a lot longer than most teams, so I think we’re well-suited to represent Canada,” Bird said. The two spent countless hours training in the hopes that one day they would be able to reach this level of competition.

“Some days you’re so tired that you don’t want to get up and do it, but you have to cause you committed,” Willert said.

In the lead-up to World Skills the two will be training for up to 15 hours a day nearly every day.

Bird and Willert will be tasked with building, programing and troubleshooting a miniaturized version of a fully automated production line over the four days of the competition. It will include the integration of a new piece of technology or equipment that they or the other teams have never seen.

The duo will be expected to build the system faster and to a higher degree of perfection than any other country in the competition in order to win.

Essentially, everyone is using the same parts to build a system that can perform the same task, but they only find out about the details the day of the competition.

Canada has never won gold in the mechatronics division at World Skills. If the two come home with any medal it will be the first time a Canadian team has ever placed in a mechatronics event.

Skill competitions are important because they give students the necessary tools and experience they need to meet ever-changing industry demands.

“They allow students to be exposed to state-of-the-art equipment, to receive advice from experts in their related fields and compete against the best in the province, country or world,” Western Canada sales representative for Festo Didactic Ltd., Greg James said.

James said the competitions are also a great opportunity for students to connect with potential employers.

Regardless of their success at the World Skills Competition, Bird and Willert will always have one thing going for them by the time they return: employment opportunities and job offers.

“I have no worries whatsoever about my future,” Willert said.

Their success at numerous other skills competitions has put them on the potential employment list at both Humber and many of its industry partners.

Bird and Willert are at the top of their game and there is no telling where their future will take them.