EDITORIAL: America may be in peril, but the kids are alright 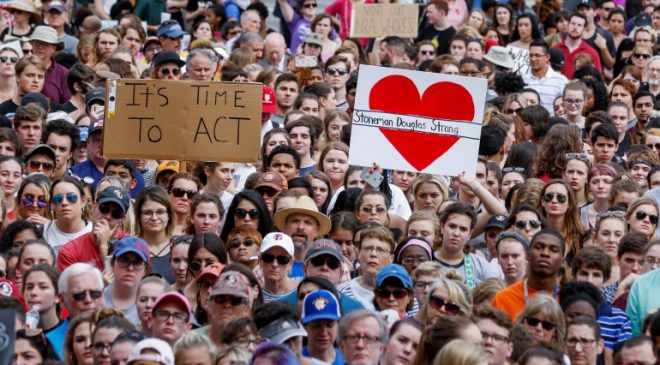 Mass shootings are becoming the new norm in the United States, with the most recent victims being the students at Marjory Stoneman Douglas High School in Parkland, Fla.

Seventeen students and faculty were tragically gunned down by a 19-year-old former student armed with an AR-15 rifle.

The inevitable followed: thoughts and prayers, cries of anguish, anger, followed by promises of change. Instead of change, however, suggestions that the nation shouldn’t talk about gun control just yet, and the National Rifle Association again citing fears of gun control, crime, and   individual rights.

But wait. There’s something momentous happening.

The teenage survivors are taking a hands-on approach to make the change to gun laws that so many have been too fearful to make.

It’s proving to be an uphill battle as the Florida state legislature defeated a bill to control weapons on Tuesday, but since then the pressure has been mounting on politicians to find a way to control firearms.

Would this happen without the political will of these students? No.

The majority of these students are now owning social media, pushing for changes by talking about their experience during the shooting, and pleading for changes to be made.

Students from all over the U.S. are joining in to voice their opinions as thousands of high school students from numerous states walked out of their classes Wednesday morning.

Students are also planning to march on Washington next month to demand that children and families become a priority to American lawmakers.

For a bunch of kids, they are being more mature than the adults in charge.

Politicians are the first ones to blame these mass shootings on video games, mental health and rap music. Anything but guns.

The students who survived the 2012 mass shooting are still too young to be angry and share their opinions with the world.

But students in Florida are spreading the word and standing up for everyone who has had to endure the terror of someone ripping apart their lives with a rifle.

Emma Gonzalez was mourning the death of her fellow classmates, but as she wiped away the tears, she blasted the political response to the shooting, and spoke about how there needs to be a change.

“The people in the government who were voted into power are lying to us. And us kids seem to be the only ones who notice and…call B.S.,” Gonzalez said during a gun control rally in Fort Lauderdale Saturday.

This young woman gave so many hope. Even though she is grieving, she stood up and talked about the changes need to made, and her and her classmates are now organizing rallies and movements.

#MeNext and #NeverAgain are two movements created by high school students since last week’s shooting pleading for the gun violence to stop, and for stricter gun laws to be in place. These movements have spread like wildfire over social media and have received thousands of retweets and likes.

Students who experienced the shooting first hand have also taken to Twitter to tell their story, and how it impacted them, in hopes of encouraging change to gun control laws.

Students taking to social media, sharing their stories and begging to be heard by President Donald Trump and other politicians, are saving lives, and maybe ­– one of these days – changing the very laws that allow this violence to occur.