EDITORIAL: Canada comes together in the midst of tragedy 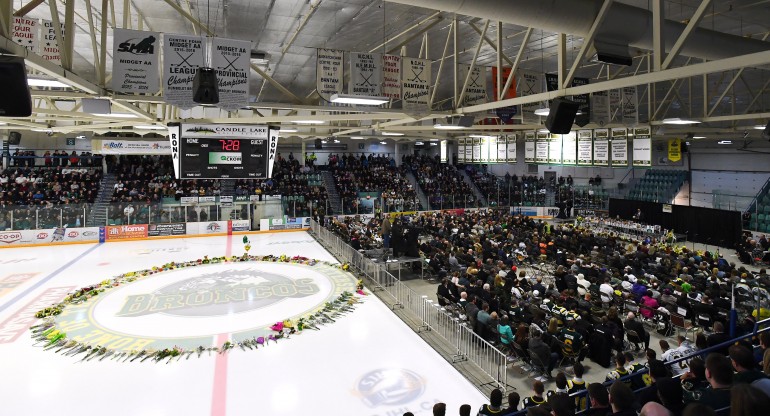 Flowers lie at centre ice as people gather for a vigil at the Elgar Petersen Arena, home of the Humboldt Broncos, to honour the victims of a fatal bus accident in Humboldt, Saskatchewan, Canada April 8, 2018. (Jonathan Hayward/Pool via REUTERS)

It’s an unfortunate part of our existence that we have to endure the news of a horrific incident, and although tragedy strikes every single day, when it hits close to home it is an entirely different experience.

The Humboldt Broncos junior hockey team was headed last Friday to play game five in the semi-final round of Saskatchewan Junior Hockey League (SJHL) playoffs when the unthinkable happened. At around 5 p.m. on Highway 35 near Tisdale, Sask., a semi-trailer transport truck collided into the bus carrying the team resulting in a catastrophic collision. Of the 29 passengers onboard, 14 were left injured while the other 15 tragically died in the horrific crash.

The youngest was 16-years-old.

The news quickly spread across the country, leaving Canadians overcome with shock and a loss for words in the wake of the tragic event. So many lives lost, most of them young players who had their entire lives ahead of them. It’s a parent’s worst nightmare.

Yet when something terrible occurs, there seems to be a silver lining born from the tragedy. Suddenly we are able to look past the things that divide us, whether we fall on a different side of the political spectrum, hold conflicting religious beliefs, or simply disagree on the most mundane of issues.

In the days following the collision, people in all corners of the country expressed their condolences to the lives lost. Vigils were held to honour those that died, opposing political leaders put politics aside, the Winnipeg Jets and Chicago Blackhawks wore jerseys with “Broncos” on the name plates, while other NHL teams stood in solidarity to mourn the young men whose lives were cut short far too soon.

Calgary Flames coach Glen Gulutzan and Edmonton Oilers coach Todd McLellan are usually on opposite sides during “Battle of Alberta” games, but came together to visit Humboldt to offer their deepest sympathies.

Even U.S. President Donald Trump reached out in a phone call to Prime Minister Justin Trudeau to offer his condolences to the families of the victims.

As Canadians honoured the Humboldt Broncos, a photograph was released showing three of the surviving players holding hands while they lay in hospital beds recovering from their injuries. Although it invokes a wide spectrum of emotions, the image is powerful nonetheless.

It shows the power of a team and represents the camaraderie and resilience of a brotherhood. Even though tragedy struck they still held hands in unity as teammates.

The cause of the accident still may be unknown, but Canadians are standing with the driver who was in the tractor trailer that slammed into the Bronco’s bus.

“As we all sit back and contemplate all that has occurred since the collision and the massive emotional impact of the death of 15 people, please know that some of us are thinking of you as well,” wrote Reddit user ‘bonnepatate.’ “Although the exact cause of the collision and the events prior remain unknown to us, we do know you didn’t set out to end 15 lives as you turned the ignition that fateful day.”

In the coming weeks ahead, people may look at the driver differently. It’s certainly important that in times of tragedy, that we try to be understanding of all of those that have been involved.

Kevin Garinger, president of the Humboldt Broncos, told those gathered at last Saturday’s news conference that “everything about this tragedy is unprecedented and it’s overwhelming.”

The emphasis, in the days and weeks ahead, will be on healing. Players with Moose Jaw Warriors and Swift Current Broncos of the WHL, who are locked in a playoff series, are grieving, some of them having lost close friends. The Swift Current Broncos lost four players in a 1986 bus crash, including the brother of Lindy Ruff, the assistant coach of the New York Rangers.

It’s going to be difficult, but there’s obvious strength in numbers thanks to social media. The resilience and strength of people can be shown if we just look at how people are talking about the issue nationally and globally.

With all the kind words that are being spoken — and quietly demonstrated in a quintessential Canadian way with hockey sticks placed beside front doors across the country in case any of the 15 needs one — the country and the world is behind them, supporting the team and community to get through this tough time together.