During the extended college withdrawal deadline this past week, the flock of acrimonious students showed their frustration following the five-week strike.

From Ottawa, where an estimated 500 students pulled out of La Cité collégiale, to St. Clair College in Windsor, where more than 11 per cent of their student population decided to leave their college, just shows everybody involved how sad and irate are over lost time.

As for Humber, the numbers haven’t been released — and Humber’s spokesperson Andrew Leopold told HumberNews.ca the dropout number wasn’t available, although almost every other college showed significant losses. The province promised to release the official numbers next week, but the early numbers include Cambrian losing 610 students, 239 leaving Sault College, 140 from Northern College, 126 from College Boreal, and 125 at Canadore. 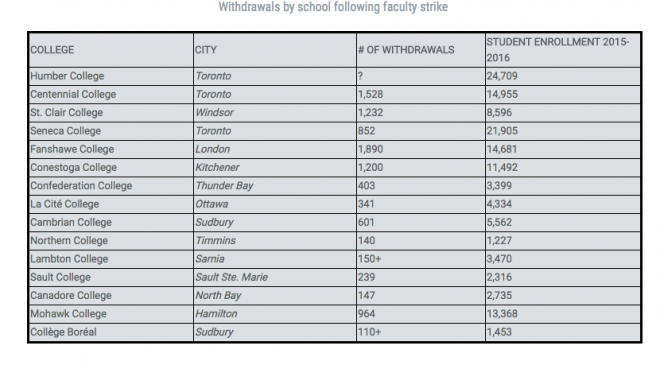 The initial welcome back was, for some students, a jump into the fire with the rigour of having to study and catch up on assignments at an accelerated pace.

This also meant cutting corners, such as institutions delaying, or in some cases, cancelling, placement programs, or extending the fall semester into the beginning of 2018.

The labour stoppage that was experienced left black eyes with administrators and faculty pointing fingers at one another in a game of “they started it.” It clearly left the most important people in the situation — the students — in the cold.

College is already an overwhelming experience. Most students are away from home for the first time and experiencing the world as it is. They have to juggle classes, homework, studying, and in some cases, a part-time job.

The pressure that mounts in numerous programs is one that cannot be ignored. According to a 2008 study by Statistics Canada, an estimated 25 per cent of college entrants won’t actually finish during an average college setting. This also includes an estimated 49 per cent holding down employment versus only 43 per cent of university students.

Students need the careful instruction and guidance of college professors to succeed — which was painfully absent during the strike. While some organized rallies and chanted alongside their teachers, there was protocol to follow in regards to formal contact. Students were left without a plan, or without an inevitable conclusion.

For some, it was a vacation — but now, with school back in session, it could be detrimental toward their progress.

It wasn’t mandatory to work on assignments, but rather an option. However, it was assumed that one made good use of their time. While some continued working to cover tuition and bills, which weren’t suspended, others tried to continue their studies, albeit blindly.

The pressure cooker is starting to build up. Having a condensed schedule and no chance to be able to earn an internship and start the steady path to a rewarding career, students felt this might have been the easy way out.

Some students were already a bad exam, a missed assignment or in this case, a labour stoppage, away from throwing up the white flag and quitting school. They could recoup their money, regroup, and come again next year — if they do at all.

When Ontario college professors were legislated back to work following their five-week strike, OPSEU President Warren (Smokey) Thomas made it as transparent as he could based on his reaction.

“The fight isn’t over, it’s just starting,” he said. “Back to work legislation is the least desirable of the outcomes.” In this case, the statement is dead on. The fight is just starting — to keep students from leaving and to regain their trust of the post-secondary institutions.