Twin sisters Farrah and Hana Elali share the same goal: make a lot of dough in their cookie dough business.

The former U of T graduates visited the Humber North and Lakeshore campuses last week to not only sell their product, but help entrepreneurs reach their dreams.

“We really just wanted to shed light on the struggles [and] the triumphs of starting your own business,” Hana said. “I think it’s great to meet other people who are in the startup phase and are in different phases of entrepreneurship.”

She came up with the idea of starting a cookie dough shop.

Hana said she knew eating cookie dough can be fattening and came up with a healthier recipe, including vegan options. At first, her sister Farrah was unsure about the idea. 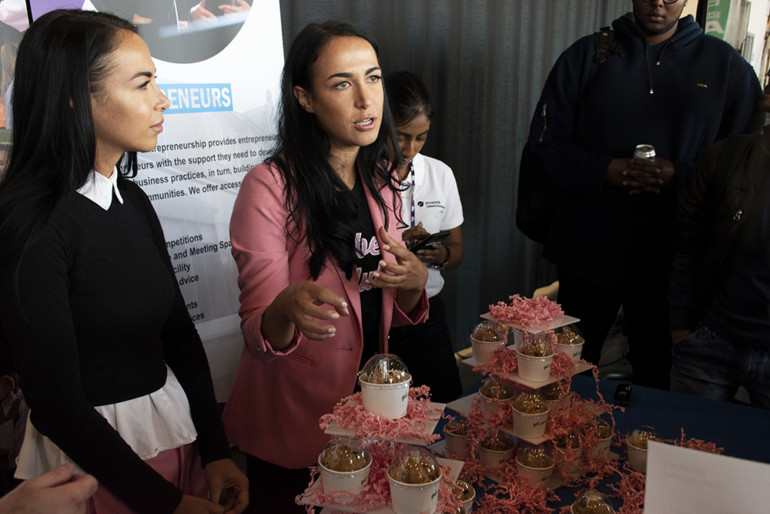 “We were at a point in our lives where we had just graduated and you’re conditioned to think that we need to finish school and then find a full-time job or you’re not successful,” Farrah said.

“So that’s where it came from. I shut it down because I thought, ‘Hana, you should be looking for a full-time job. What are you doing trying to start a business right now? It doesn’t make sense,’” she said.

Once Hana had her plan in place, she was determined to go through with it. At that point Farrah was on board, they said.

“You know what, I’m totally on board. It’s time to take a risk. We’re at a point in our lives where we don’t have that much holding us back,” Farrah said.

There was an opportunity to own a shop at Queen Street West, but it came with a catch.

The twins branded their business as a more feminine bakery, until they had to change to a hip-hop gangster style, they said.

“The guys who owned the shop were looking for someone to take over and keep the same vibe that they had before,” said Hana. “That’s when we thought to rebrand and do this gangster vibe they were looking for.”

Even though they didn’t get the store, the sisters stuck with the branding change as Dough T.O.

They were able to land their first location in Kensington Market for four months. They’ve continued to pop up throughout Toronto as their success grows.

Just like Hana and Farrah, the Centre for Entrepreneurship (CFE) offers support to entrepreneurs.

The CFE, located at Lakeshore, offers four ongoing programs and a soundproof media lab with camera equipment, all catered to entrepreneurs and intrapreneurs.

“We thought you know what, this is a perfect idea where we can bring in these two young entrepreneurs, have them share their inspirational story, and of course bring some cookie dough along with them,” he said.

Brilhante found the Elali sisters on Instagram and came up with a neat idea for the CFE launch party. He said cookie dough is something many people get excited about.

“Everyone can get behind desserts and treats, so Dough T.O is this new thing we see on Instagram,” Brilhante said. “They’re gaining a lot of attention and popularity.”

“I mean it’s a really simple idea, right? It’s cookie dough,” he said. “Who could think that you could just make a whole business out of cookie dough? And that’s why we get excited about something like this.”