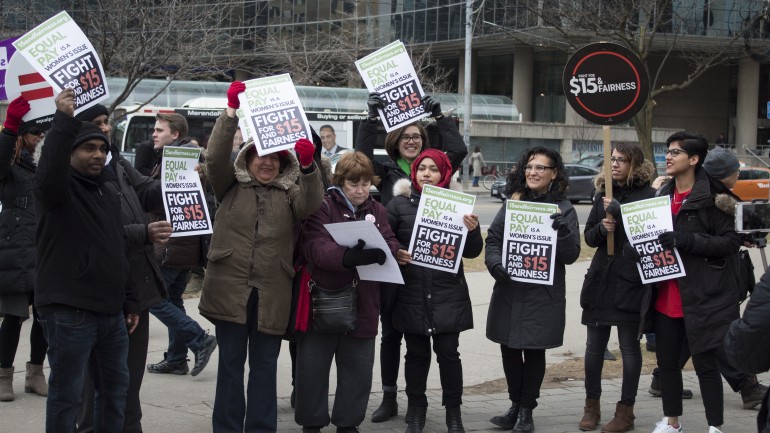 Equal Pay Coalition of Ontario protested for their demands outside Queen’s Park on Equal Pay Day on Tuesday. (Taz Dhaliwal)

Tuesday was Equal Pay Day and the Equal Pay Coalition of Ontario marked it with a protest outside of Queen’s Park.

Dozens of people protested the gender pay gap and warned although the province passed labour law reforms, organizations were seeking exemptions from them, including holiday pay and equal pay.

The coalition declared they are specifically asking for three things from the Ontario government.

The first demand includes the implementation of a strong pay transparency law to enforce equal pay. The second includes the introduction of fully-funded universal, affordable, and accessible Public Child Care for children in pre-school and elementary school, along with decent wages for caregivers.

The third involves properly funded community agencies that will give pay equity to public service workers.

Fay Faraday, the co-chair of the Equal Pay Coalition in Ontario and one of the first speakers at the event, said protesters are fighting for equal pay with passion and “a fire that burns bright.”

Faraday highlighted the varying degrees of the pay gap between white men and women from other races.

“The gender pay gap for our Indigenous sisters is 43 per cent for every dollar that a white man makes,” she said.

“The gender pay gap for our racialized sisters is 38 per cent,” Faraday said. “For immigrant women, it is 34 per cent and on average women in Ontario face a gender pay gap of 29.3 per cent.

“That means that over the course of your working career, women in this province are working free for 13 years, that is the size of the gender pay gap,” she said.

She said the gender pay gap has been real for generations now and the solutions have also been available. Faraday said women are done waiting and are now saying, “show us the money.”

Mellissa Rebelo, a protester who works in retail, said she noticed there are a significant number of men with the same position as her who are making more money.

“I assumed that it was because I’m a young woman, who was starting out in the field, but now I’ve been with the company for 13 years,” she said. “There are newer members that have joined, working the same jobs and positions who are making significantly more than I am.”

Rebelo said it’s discouraging and can make her feel the situation feel hopeless at times, but she said it was also unacceptable. Rebelo said she couldn’t think of any reason to justify this gender gap between the men and women at her job.

“I think transparency is important, to be able to see what a position pays regarding gender and it should be public,” she said. Rebelo said this was especially important in terms of government jobs as well.

“I think it’s a step, but I think society’s views have to change first. There are a lot of gender stereotypes that exist and that people assume are real,” she said. “These old mentalities are carried on to the next generation and we need to stop that.”

Deena Ladd, a representative from the Worker’s Action Centre, told protesters workers cannot challenge their salary if they do not know what others are getting paid. That’s why pay transparency is critical, she said.

“We need to be able to challenge these corporations, just because they call you part-time, temporary or relief workers, they don’t want to pay you benefits,” Ladd said. She said that this has been legal in the country is a shame.

“That is what we’re challenging today, we want pay transparency,” Ladd said.

“I’m here today because we really need to realize what’s at stake with the elections,” she said.

Ontarians will be voting in the next provincial election on June 7.

Speakers at the event pointed out the Conservative’s reputation for cutting funding and weakening unions, while workers’ made gains pertaining to rights over the past years with the Liberals in power.

Ladd said part-time workers are now getting paid for public holidays and she said that’s thanks to all the organizing that has been crucial to the advancement of worker’s rights in Ontario.

However, Ladd also said employers in the tourism, restaurant and other sectors that pay workers low wages are currently fighting for exemptions from paying holiday rates to their part-time staff.

“So, our message today is hands off our public holiday pay, hands off our equal work for equal pay because we’re getting a big back lash in this province,” she said. Ladd said universities and colleges in the public sector, along with many other industries, are pushing for exemptions as well.

“We’re organizing today, we’re making sure that the politicians and those in power here know what our demands are,” she said. “If you’re not organizing for the election, you need to sign up and join one of the campaigns here today.

“We have less than 60 days to make sure that any of the gains we’ve made are not lost,” Ladd said.