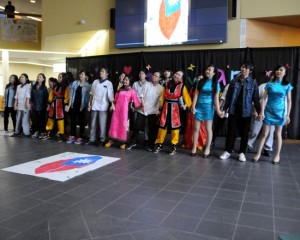 Taiwan Culture Event was put together by Taiwanese exchange students from the National Kaohsiung University of Hospitality and Tourism currently studying for a year at Humber College. CHELSEA HOWARD

Students from the National Kaohsiung University of Hospitality and Tourism in Taiwan gathered at the Humber North concourse to showcase their culture last Tuesday.

The students, who are completing their third year at Humber as part of an international exchange program, and staff organized and planned the Taiwan Culture Event for approximately three months.

More than two dozen students from NKUHT sang Taiwanese songs such as “Taiwan I Love You”, and displayed artwork throughout.

The students also performed dances for the public such as their traditional flag dance and various pop dances.

Marketing leader and NKUHT student, Beryl Liu, 20, said, “We can become familiar with one another by preparing and practicing, and have the chance to wear traditional clothes and interact with other cultures.”

Free food such as bubble tea, minced pork with rice, and popcorn chicken was made available.

“We need to promote our Taiwan culture and motivate Humber students to go to Taiwan as an exchange student,” says Joey Tu, 20, student at NKUHT.

Tu explains that the language barrier has been the most difficult, and familiarizing themselves with the English language has also been a challenge.

“It’s a big part of Taiwan community trying to promote the relationship they have with Toronto and Humber. It’s a great opportunity for the college to promote the culture exchange,” said Mark Gosling, an assistant professor with Humber’s School of Hospitality, Recreation and Tourism and visiting faculty member.

Gosling said Taiwanese and Canadian culture differ in that Canadian students are more interactive, whereas Taiwanese teachers have a much higher social position.

The exchange students have completed a seven-week orientation session at the Lakeshore campus, and will also be taking two semesters at the North campus, as well as a three-month paid internship

Coordinating and participating in the Taiwan Culture Event is also part of the exchange program.

“If you want to see something different, in Taiwan you step off the plane and it’s a completely different world,” says Gosling.

Gosling said that seeing the work and effort students put into this event and what the students get out of it is the best part.

After the end of the school year, students will return home to Taiwan and finish one year of schooling to obtain a bachelor’s degree.

This is the eighth year Humber has run an exchange program through the NKUHT, with more than 250 students participating to date.