It’s game on once again for Humber’s extramural dodgeball team.

Dylan Walters, coach for the women’s Humber Hawks dodgeball team and Intramural Coordinator, prepared his extramural team for the 2018-2019 season at their first official practice on Oct. 3.

Walters worked his new team — although there were some familiar faces on the court — through a series of warm-up drills.

Danielle Benedek, a third-year Humber Nursing student, said playing dodgeball was a learning curve for her. 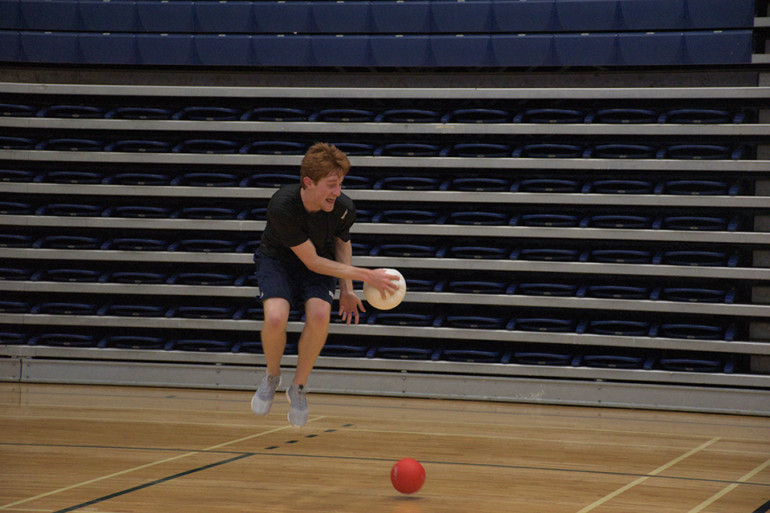 Matt Bedforth leaps to avoid a ball at the extramural coed dodgeball team practice. The team’s first tournament is on Oct. 26. (Cassondra Daley)

“I’m back now for my third consecutive year because it’s fun and dodgeball always keeps me healthy and active,” Benedek said.

“My first year I found it easy to balance school and playing dodgeball because the team practices happen late in the evening and everyone is very accommodating,” she said.

Humber’s extramural leagues offer students a chance to play semi-competitively with other schools. Players are supplied with tournament uniforms and participants in good standing are invited to a banquet and awards dinner at the end of the year.

Vanessa Owusu-Afriye, a fourth-year University of Guelph-Humber Kinesiology student, said she fell in love with not only the game or the team, but also how other schools play and challenge each other.

She is a returning athlete on the dodgeball team for her second year, and she said the team is very welcoming and inclusive which made her want to come back even stronger every year.

Even though we look like a bunch of Breakfast Club kids that came together to join a team, I can honestly say that I have gained a lot of respect for both the people on my team and the sport,” Owusu-Afriye said.

Both Benedek and Owusu-Afriye said they are looking forward to what this season has to offer and there are high expectations this season for the team.