Faculty take stage with students for first ever jam session

Weaver didn’t need to say anything else.

The Bachelor of Music program played an hour of improvised music during its first-ever student and faculty jam session.

Nathan Martin, 21, a fourth year student of the program, said while he didn’t play on Wednesday afternoon, he’s excited about the new event.

“You break a little bit of the teacher-student barrier when you do this kind of thing,” he said.

Martin said he was nervous for the friends of his who would actually be taking the stage.

“It’s always nerve-wracking to play for people you idolize,” Martin said, adding many faculty members are influential in the Toronto music scene.

He said for some students performing may be just the push they need to get over their nerves.

The first performance had a quartet of students accompanying their teachers on a variety of instruments, including Lucas Dubovik, 18, who played the sax.

Dubovik said he was frightened before stepping on stage. He said being a first-year student, playing with “ridiculously good” faculty members and “amazing” students from other years, was intimidating. 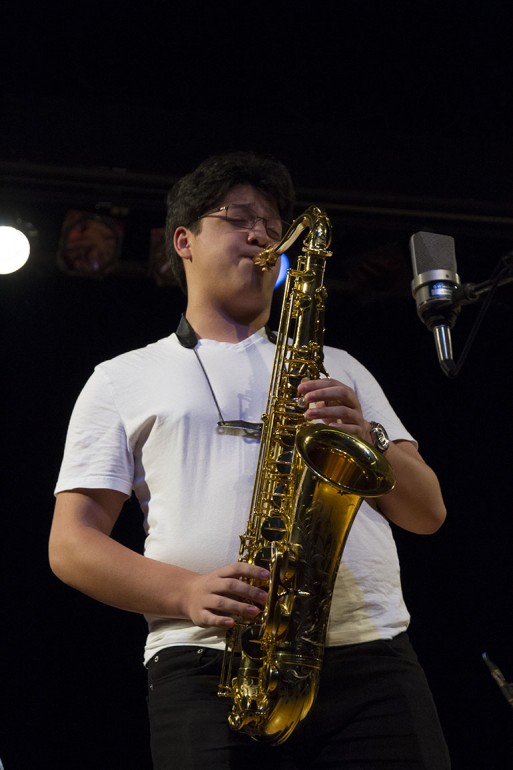 But he has a simple way of dealing with that anxiety.

“Pardon my French, but,” he said, then he cursed and shrugged. He smiled, steeled his nerves and said, “jump on stage.”

Despite his earlier anxiety, Dubovik said he thought the performance went alright.

“It went better than it did in my head the night before,” he said.

He said he planned to participate in the next student and faculty jam session in January.

“I’ll take every chance I can get to jump on the stage with amazing players,” Dubovik said.

Program coordinator Andrew Scott said he felt jam sessions were a great way for students to learn the art of playing jazz.

Scott, a guitar player, said he thought about signing up for the performance today, but saw that the docket was already pretty full. He said maybe he’d play next time and talked about what songs he’d pick.

“If I could play any song, I guess I would like to play something by Charlie Parker or Duke Ellington” because they are master musicians, Scott said. “Or Thelonious Monk.”

The next jam session will be a faculty jam session on Tuesday, Sept. 26, at the Rex Hotel at 194 Queen Street West near University Avenue.