Fall of loonie brings rise in travel prices across the nation

Students who wish to escape snow and freezing temperatures during the upcoming Reading Week are going to have to pay higher prices.

For the first time in more than four years, the Canadian dollar has fallen below 90 cents US, costing Canadians who are flying south more to avoid the extremely cold winter this year.

“The flight ticket prices have increased slightly across the board. For most major travel operators in Canada, an approximately $35 per trip surcharge has been added to the price tags for flights going to the sun destinations, which include popular Reading Week getaway spots like Cuba, Mexico or the Dominican Republic,” said Jason Merrithew, the national business manager for Merri Travel.

But regardless of the cost of getting away, this winter may be too much for Canadians to handle; despite the weaker loonie and higher travelling costs, more Canadians are actually planning to travel this year, according to Merrithew. 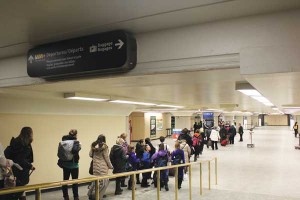 “We have noticed that the demand to travel during Reading Week and also for the summer season has increased compared to previous years,” he said.

Aside from popular sun destinations, Merrithew added Canadians are also showing interest in going to Europe.

“I guess it is because more Canadians are getting back to travelling this year, and Europe is a great destination if you have a few weeks to go,” he said.

One way to avoid facing additional surcharges after booking a flight is to pay the amount in full up front, instead of just paying the deposit, said Michael Pepper, president of the Travel Industry Council of Ontario.

“Operators are allowed to charge additional fees of up to seven per cent, if thwey decided to add a surcharge after travelers booked their trip. However, if you have already paid in full, the surcharges would not affect you,” Pepper said.

“Most travelers have already planned ahead for their trips – most of them will not change their plan because of it. But next year, travelers may be expected to see a 10 per cent increase in the cost of travelling,” Pepper said.

Can Zaim, 24, is a first-year project management student at Humber’s North campus. He said he is planning to go to Montreal during Reading Week.

“One week is not enough,” Zaim added.

Some students however, are more concerned about the cost of travel.

Sefra George , 19, a first-year Humber psychology student said she used to travel during spring break but is not going anywhere this time.

“The cost of going to school is high and I don’t think I can afford to travel, at least not during Reading Week,” she said.

Noting the tanking Canadian dollar, George said she is definitely not traveling to the United States for a while.