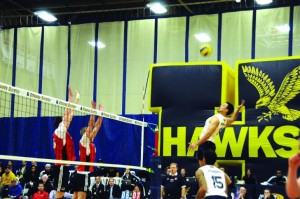 The Hawks were coming off an eight-day break, giving the team some downtime to relax, but it seems that they may have come back a little too relaxed.

Humber got off to a sluggish start Thursday night, losing the first two sets to the Falcons, a deficit that proved hard to come back from.

After what was initially shaping up to be a three-set match, the Hawks returned to the court after losing the second set, determined to turn it around.

The Hawks weren’t done with Fanshawe yet, and won the third and fourth sets to tie the game at 2-2, forcing the Falcons to a fifth set.

By the end of the match, it was too, little too late for the Hawks. Humber’s late efforts came up short as Fanshawe refused to let this win slip out of their hands, and ultimately took the game with a five-set victory.

“I thought our performance was lackluster” said Hawks head coach Wayne Wilkins. “I advised the team that they were going to be in for a fight. Fanshawe came to play.”

Fanshawe has been trailing the Hawks closely throughout the season, and chasing the number one spot, that belongs to Humber.

Falcons head coach Patrick Johnston knew that if they had any chance at beating the Hawks and getting closer to clinching the number one spot, they had to be prepared with a game plan and not veer away from what they practiced.

“Throughout the match we just wanted to stick true to our system and focus on what our game plan was from the very start,” Johnston said.

“They had a good game plan,” said Humber Hawks hitter Trevor Wong. “They played to our weaknesses whenever we had some of our weaker hitters in the front row, and they attacked our smaller blockers.”

“We came up flat in the first two sets,” he added. “We can’t do that against good teams.”

Johnston believes it was the mental focus that made the difference between a loss or  win for the team.

“[The difference] was mental mistakes,” said Johnston. “For us that’s what brought us into that fifth set, and on their side, there were also some mental mistakes, and they were ultimately the ones that will make the difference when a game like this is that close.”

Although Wilkins is disappointed with the results, he’s not panicking yet.

“We’re still in first place, the difference is we had to win one of these games,” said Wilkins. “It was between this one and the one against Mohawk, so now the pressure’s on.”

“We have to win Mohawk.”