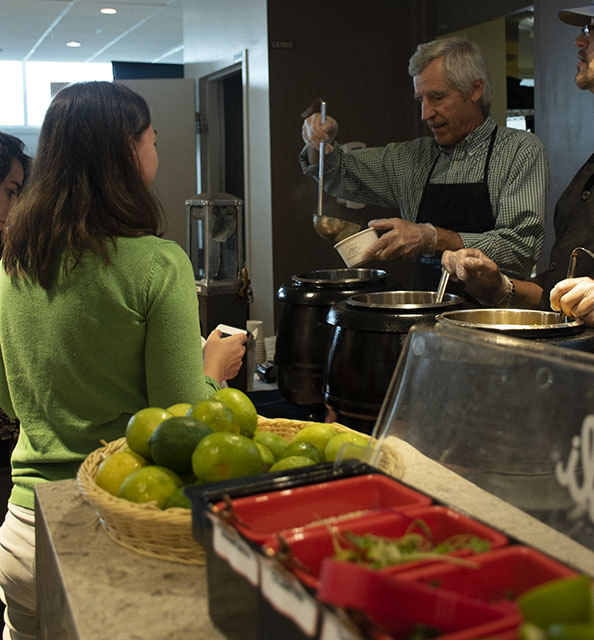 Chef Dave Hunsburger fills a bowl for a hungry student at the soup bar. (Madison Raye)

Humber College and Feed It Forward teamed up to open a pay-what-you-can soup bar at the North campus on Tuesday.

Jagger Gordon, the founder of Feed It Forward, said he wants to put an end to student hunger and grow his operation Canada-wide.

“Forty thousand students went hungry last year,” said Gordon, who launched the non-profit organization in 2014 to divert good food headed to dumps to people, including students, who are hungry.

A study from Meal Exchange, a national charity focused on food on food on college and university campuses, found almost 40 per cent of students surveyed experienced food insecurity.

The study said the high cost of food, tuition fees and housing were largely to blame.

It stated post-secondary students have been impacted like the general public, stretching their pay checks and credit to meet the demands of an unforgiving economic climate.

“So, having a pay-what-you-can system here at Humber College North campus, we’re able to basically offer a healthier way to live and that’s feeding their stomachs so they can feed their minds,” he said.

Monica Khosla, the president of IGNITE, said many students agreed with the idea of the soup bar because of those high costs.

“We all need good healthy food in order for our brains to actually function on a day to day basis,” she said.

The new soup bar is also focused on cutting down food waste. Gordon said he saves food before it spoils and hits a landfill.

A City of Toronto report found $31 billion worth of food is wasted annually, or about $1,500 per single-family household.

The soup bar provided a variety of soups, which students raved over.

Photography student and avowed soup lover Edwin Monroy said he thought the soup bar was a great addition to campus.

“This is a really good idea, getting soup, especially since we are getting close to winter,” he said.

“I would recommend it for everyone, even staff,” he said. “Trust me, it’s good.”