Female empowerment panel focuses on the value of self-worth 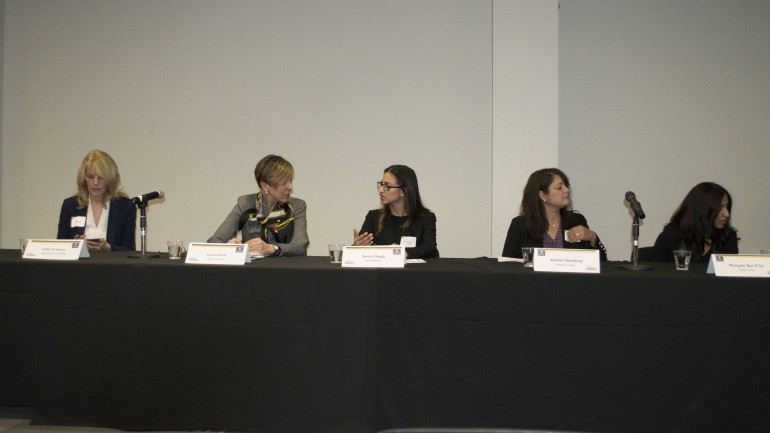 Five businesswomen told aspiring Humber grads that the importance of self-worth in the workplace is part of the formula to empower women to break down barriers and build success.

“You need to appreciate your value and what you’re bringing to the table, male or female,” said Seema Singh, business development and marketing consultant at ThinkCOMPASS.

Five panellists brought together by Humber Lakeshore attribute their success to knowing their worth and making that known. They believe they are in a higher position in their careers because they refused to be defined by gender, and instead, measured by their intelligence and contribution.

The panel included women from various firms including Quaker Foods, Hewlett-Packard, Humber College, Legal Resource Consulting and ThinkCOMPASS. The event attracted more than 30 people and the panel addressed questions from the audience that involved how women can empower themselves in their field of work.

“Once you understand your value don’t be afraid to ask,” Mangala Rao-D’sa, a marketing executive at Quaker Foods, said.

Several of the panellists agreed asking questions about wage, position, and worth at a company is crucial to employment growth and success. Since 2007, more women are finding themselves in senior positions at major corporations than ever before, but the gender ratio is nowhere near to balanced.

The group of businesswomen speaking to soon-to-be college graduates entering the workforce had some words of advice on creating a personal brand.

Cathy D’Aversa, president of Legal Resource Consulting, stressed the importance of being presentable, having confidence, and projecting a certain self-image that demands respect.

“What I did not learn early enough is that you have to train people how to treat you,” she said.

With the surge of women entering previously male-dominated fields of work, D’Aversa said it is important for those that are underrepresented to make a point of ensuring they are treated equally.

Attaining complete equality means closing the wage gap between men and women. According to Statistics Canada, women earn 87 cents for every dollar made by men, although, this ratio has improved because women are achieving higher education than they have in previous decades. However, education has not completely closed this earning gap.