Feminism questions raised by post on Spotted at Humber

A post on the Spotted at Humber Facebook page about launching a feminist group on campus spiraled into debate about what feminism is and if it was still an issue.

“Are there any feminists at either (University of Guelph-Humber) or Humber who have formed a group/society, or are looking to be a part of something of that sort?” the anonymous poster asked on Oct. 25. “I’d love to advocate and promote feminism in our school and educate others about gender equality and intersectionality (related forms of oppression), but I don’t know where to start!”

Second-year Fashion Arts student Laura Angus, 25, was one of the women who joined in on the online discussion. She said reading some of the comments on the post only reinforced the incentive to start a group because of the number of people who didn’t know about or understand feminism.

“I feel like people have a negative perception of feminism in general,” Angus said. “It’s not about hating men and a lot of the comments seem to think it was or that (women are) better (than men).”

Another woman unimpressed with the comments was second-year Media Studies student, Alison Grant, 19.

“Those (comments) made me so mad,” Grant said. “Most of the arguments didn’t even have anything to do with what we were talking about. Anytime someone brings up the word feminism, people think of the radical feminists who are like, ‘All men suck!’”

Grant said she has lived on residence for two years and has experienced forms of harassment during parties, which have been uncomfortable but have become a social normality many women face.

“People have parties in their rooms and there will always, without a fail, be guys who always get way too close to you or touch you without your permission,” Grant said. “Lots of people don’t understand that people have boundaries and you have to respect that.

“Especially when they’re drinking, the line gets blurred in their head. But there have been lots of instances where I have to shove people away from me.”

Humber College’s Lakeshore campus has a few clubs geared to helping students raise awareness for social causes, one of which is the Female Empowerment Movement (FEM).

Dylan Rudder, Humber Students’ Federation (HSF) vice president of student life at Lakeshore, said a student requested to start the club in July. FEM’s mission, he noted, is to empower women to stand up for their rights and get rid of the negative stigma that surrounds feminism.

Rudder said that leaders of FEM organize events focused on discussing current feminist issues. He said he hopes there will be at least two or three events before the end of the fall semester

“I was excited for the students to get this club up and running. I think it’s an important club to have on campus and I love the fact that they’re leaving it open for guys and girls to participate in,” Rudder said.

Ahmed Tahir, HSF vice president of student life at North campus, said although he is enthusiastic about the idea of having a club supporting feminism at North campus or Guelph-Humber, it is not something he can start.

“We don’t create groups and get people to join, it’s more the other way around. Students create groups and we help them,” Tahir said. “If someone wanted to make it (a feminism club) for next year I would say, ‘Make it for this year,’ because there’s still some time to do it.

“Feminism at times is associated with man-hating and all that kind of stuff which it shouldn’t be, it’s just about equal rights,” Tahir said.

He said the deadline for club proposals is January to allow time to host events for the remainder of the school year, but HSF does make exceptions depending on the cause. 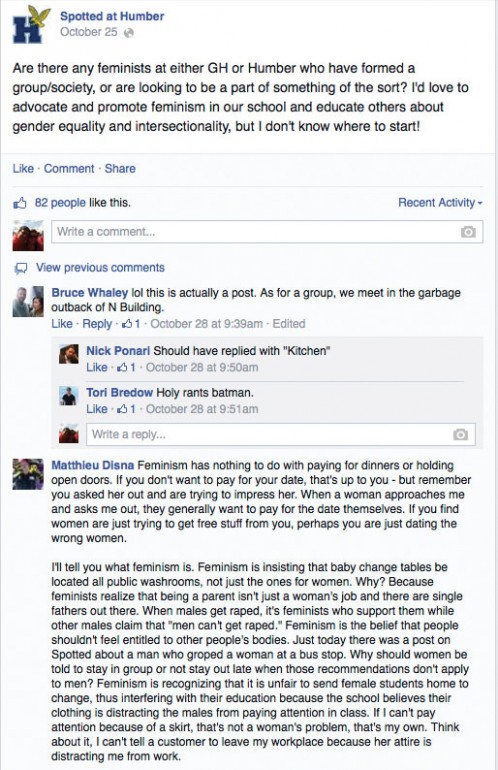 Screen shot of students explaining their views on feminism.

Feminism is described by Wikipedia as “a collection of movements and ideologies aimed at defining, establishing, and defending equal political, economic, cultural, and social rights for women.” However, even after more than 40 years in its modern incarnation, feminism is not well understood by many people.

Emma Goldman, the famous anarchist and political activist, was a powerful voice during the birth of feminism in the late 19th and early 20th century whose words still reverberate today.

“The import is not the kind of work woman does, but rather the quality of the work she furnishes. She can give suffrage or the ballot no new quality, nor can she receive anything from it that will enhance her own quality. Her development, her freedom, her independence, must come from and through herself. First, by asserting herself as a personality and not as a sex commodity,” Goldman wrote in the 1910 essay “Woman Suffrage”.

While many important things have changed in advanced societies since Goldman’s time — women can vote, own property and are legally equal to men — they are still often victims of violence and targets of harassment.

Sensational news stories such as those involving Ray Rice and Jian Ghomeshi, and even a video of a woman getting catcalled as she walks around New York City became three prime examples of feminist rallying points in recent weeks.

Last September, TMZ released the video of Baltimore Ravens football player Ray Rice dragging his then-fiancé Janay Palmer in a state of unconsciousness from an elevator (later-released footage showed him punching her). After the incident, Palmer refused to press charges against Rice and married him. The controversy drew many angry comments posted on social media.

On Oct. 26, the CBC announced Jian Ghomeshi was fired as the host of Q. It was later revealed the termination was triggered by allegations of Ghomeshi’s violence against women. Ghomeshi commented about the allegations of his violent behavior on his Facebook site, and later filed suit against the CBC for $55 million citing breach of confidence, bad faith and defamation. Declaring his sexual behaviour to have always been consensual, he also demanded to be reinstated.

Since then, nine women have come forward telling the media their versions of what happened to them during encounters with Ghomeshi, describing them as “not consensual” and “violent.” The Toronto Police Sex Crimes Unit is now investigating the allegations made against Ghomeshi after three women have filed complaints.

Also that week, a video of catcalls made at a woman as she walked on Manhattan streets on Oct. 28 by Hollaback, an organization battling harassment of women, was posted online. Shoshan Roberts, 24, was filmed as she walked for 10 hours wearing a t-shirt and skinny jeans, and faced more than 100 catcalls.

The video has been viewed more than 33 million times. Soon after the video was released, Roberts started receiving rape threats.

These stories of verbal, physical and sexual harassment and violence towards women have put a spotlight on certain women’s issues in society and have also brought out strong reactions from the public.