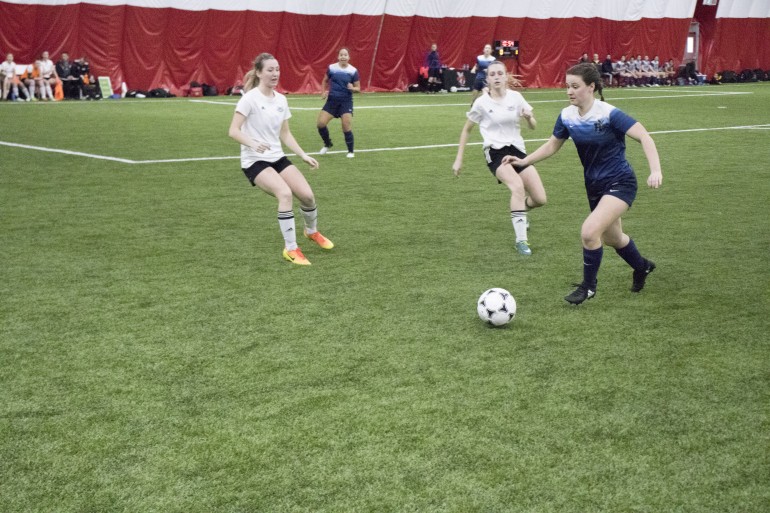 The women’s indoor soccer team will compete at the OCAA provincials at Redeemer College from March 22 to 24. (Mike Furtado)

Going into the tournament Humber needed to place either first or second place in order to book a ticket to the provincial championships.

In their first matchup of the day Humber ran into a short-handed Lakehead-Orillia team who only had enough players to fill their positions on the field with no bench players. Humber won the match easily and powered in 11 goals, which was too much for the scorekeeper to handle as the scoreboard stopped tallying them after the Hawks eighth goal.

Humber’s head coach Vince Pileggi said his team understands the dangers of letting a blowout win get to their heads, especially when it comes in the first game of a tournament.

“For us, we have a lot of girls with experience, they know what the preparation is all about and they know that regardless of who the competition is, or what level they’re at, we got to continue to play our game,” he said.

In the Hawks second matchup of the day the team faced a hungry Conestoga team who were not looking to back down to Humber.

Luck clearly wasn’t on Humber’s side during this matchup as the Hawks missed a penalty shot, couldn’t convert on a breakaway and hit the post on a shot that appeared to be a sure goal. The missed opportunities led to a draw, with both teams scoring one goal.

The Hawks rounded out the tournament in dominant fashion as they took down Confederation College by a score of eight-nil.

Humber won the tournament by goal differential over Conestoga College and both teams booked their ticket to the OCAA provincial championships.

Pigelli said this tournament was a great opportunity for his team to practice good habits leading into the provincial championships.

“We have to make sure we have our lines set, see who plays well together, continue to play our style and if we do that we’re going to be successful,” he said.

The Hawks now look forward to the provincial championships being held March 22 to 24 at Redeemer College in Hamilton.