The Medicine Hat a Humber folk rocking unity of five 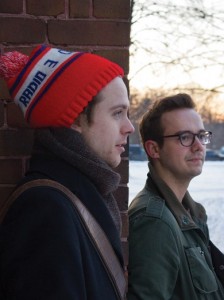 Photo by Nick Jean
Mike Boyd (left), Elliott Gwynne (right) and Aaron Hoffman (not pictured) are blending the knowledge they’re gaining at Humber with natural talents in the five-piece band The Medicine Hat.

One could easily say that The Medicine Hat would not be the band they are today if not for Humber College.

Hoffman, 21, was brought into the group because he was living with Boyd, 23, when their keyboardist at the time left to pursue her own project. Their very sound is strongly influenced by the education Hoffman, Boyd and bassist Elliott Gwynne are receiving and bringing back to Tyler and Nabi Bersche (guitar and vocals, respectively).
“We’ve broadened our musical knowledge and repertoire and overall understanding of different musical styles,” Boyd said. Gwynne agreed, adding, “lately, even on the last record we just made (Old Bones), there’s chord changes I wouldn’t even know of if I didn’t go to Humber.”
While that difference in education may cause a strain for some groups, The Medicine Hat is thriving on it.
“We all kind of stem from the same place and we’re still united by the thing that we started out in,” Boyd said.

That thing is a depth of understanding for the feeling and emotion behind the music and it hasn’t gone unnoticed.
Will Jarvis, one of Gwynne’s instructors at Humber, described his student as being dedicated to the feel and into the emotion of the music.
The band is looking forward to business picking up this summer for The Medicine Hat when Boyd and Hoffman graduate.
“Everyone in (The Medicine Hat) is passionate about this band and if you see us live you can see that… We’re having way too much fun,” Gwynne said.
Old Bones, the group’s first full-length recording, is the culmination of their disparate influences, education and inspirations. “No one person wrote one song,” Gwynne said. The album is available to stream or purchase at, www.themedicinehat.com. Readers can also download the title track for free.