Gourmet lunch on a budget and from a truck.

The Humber College Food Truck Festival kicked off for another year on Oct. 19.

Twice a year during the fall and spring, Humber hosts a two-day food truck festival.

The festival had a variety of different food trucks that sold selections ranging from savoury to sweet and every dollar made goes towards the Humber Gives Campaign, which provides scholarships to students in need.

The first day of the event took place at the Lakeshore campus, while the second day the caravan of six trucks set up at North campus. 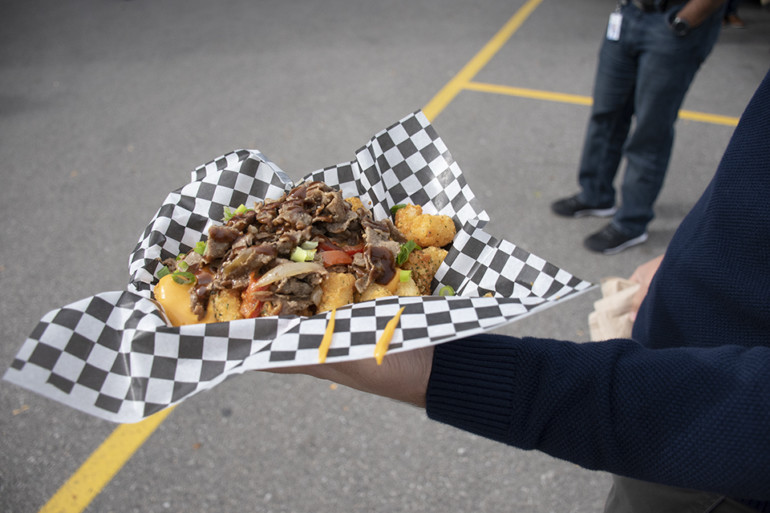 The mobile menu included Trochilus Gourmet Jamaican Jerk Chicken, a food truck that serves Jamaican cuisine and specializes in jerk chicken; Get Your Own Tots, which specializes in tater tots that can either be serve plain or loaded with a variety of different toppings; and Gourmet Guyz, a truck that specializes in gourmet sandwiches.

“It would have been nice if it were warmer,” said Ashley Tinoco at the Lakeshore campus event.

Despite the weather not being the greatest on the first day, Tinoco said it’s great that there are variety of different trucks available offering a variety of options.

Kanait Raza, a student in the Business and Accounting program at North campus, said she likes that this festival offers halal options.

She said the experience was cool and also finds the items sold to be classy.

“I love the food truck festival because it offers different food choices that you don’t have every day,” said Ashley Soriano at the North campus.

The event was organized by Antonio Folino, event coordinator for the school of Hospitality and Tourism.

Folino said he had let the high school across from the Lakeshore campus — Father John Redmond Catholic Secondary School and Regional Arts Centre — know about the event.

He said he wanted everyone in the community to take part in this event along with the Humber community.

The next food truck festival will be taking place during the spring.