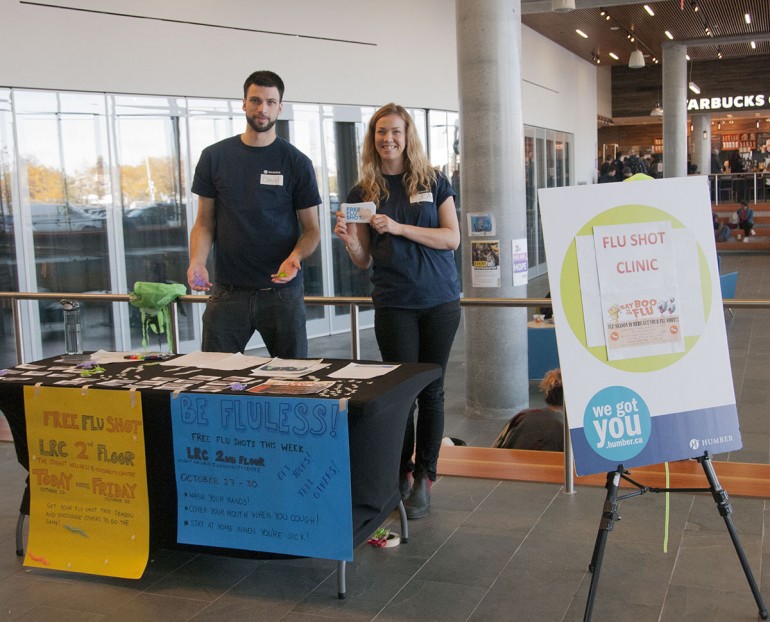 Students and faculty stopped by the Student Wellness and Accessibility Centre’s flu shot clinic this week.

Roll up your sleeves! This week Ontario is kicking off its annual flu immunization program in time for flu season.

Humber North is hosting a flu shot clinic in the Student Wellness and Accessibility Centre in the LRC for faculty and students, concluding today at 3:30 p.m.

Some students believe it’s important to get the vaccine every year.

“It’s a good preventative measure for myself. I don’t want to get the flu, especially being in school. I can’t afford time off,” said Mariarosa Sciortino, a nursing student.

“We’re all in close quarters here, so I think we all should be getting it, because we all touching elbows here and no one wants to get sick,” Sciortino said.

Toronto Public Health recommends every resident over the age of five get a flu shot. This year, the city has made the vaccine available for free at nine community clinics and 450 pharmacies.

The Ministry of Health says anyone living, working or going to school in the province can now be immunized for free at doctors’ offices, health clinics and several pharmacies.

This year’s campaign also offers the option for kids between the ages of two and 17 to have their vaccine administered via nasal spray rather than the traditional injection, though parents may still opt for the conventional approach.

The ministry says the vaccines for children protect against four strains of influenza rather than the three in the adult vaccine.

“They identify certain strains of what they anticipate would be the flu. Not to say that you’re not going to get the flu, because there are many variations of many different types of bacteria that you could get. But this one is supposed to be the flavour of the month. So that’s what you’re getting,” said Josephine Fiorello, a registered nurse who was working at the flu clinic.

Toronto Public Health said that the vaccine is only 60 per cent effective, and it takes two weeks to offer full protection, urging people to get their flu shots early.

An estimated 12,500 people are admitted to hospital each year for complications arising from flu and about 3,500 die, according to the Public Health Agency of Canada.

But not all students in Humber are convinced it is necessary to get a flu shot.

“If you’re paranoid about (getting the flu), I guess you can get it,” he said. “But I don’t think it makes a difference in general.”

The clinic said that whether or not someone chooses to get the shot it’s important to continuously wash your hands and be mindful of sharing germs to prevent spreading the flu.